Flowers On Our Sweet Potato Vines 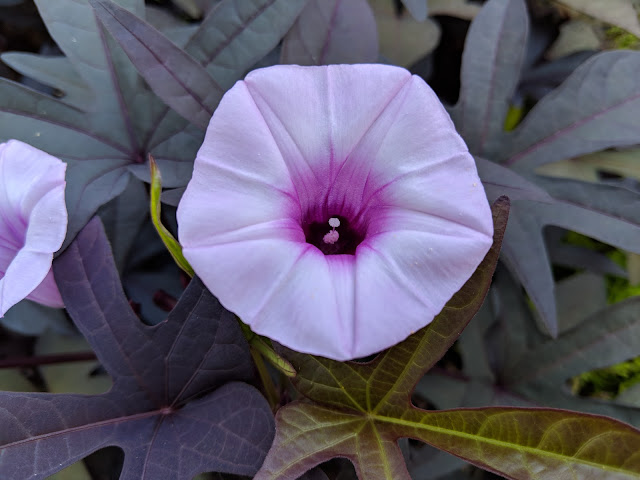 We've been growing Sweet Potato Vines for the better part of ten years.  Basically ever since I started to buy and plant containers of my own, we've found a home for one of these.  Or six of them.  With their rock-bottom price (usually $0.99 a piece), I naturally grab one of these and a spike or two and check the box on the "spill" and "thrill" in the fill-spill-thrill container philosophy trio.

But in all of that time, I have never had a Sweet Potato Vine flower.  Until now.  And I have not one vine flowering, but two!  In two different containers.   Here, below, you can see both of the wine barrel containers that I used on our patio and you can see that both of them have a very healthy/robust purple sweet potato vine and both are flowering! 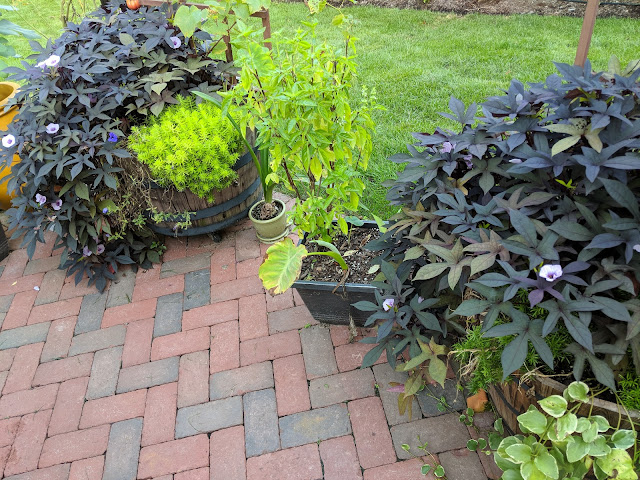 (also note how happy the Lemon Coral Sedum is, eh?)

The flowers are quite striking and add some drama to the normally boring vine. 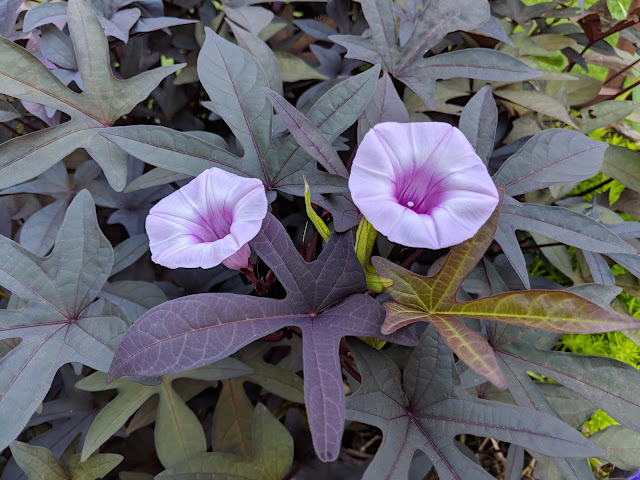 From this DIYNetwork post, it turns out that the reason I haven't seen flowers before on my Sweet Potato Vines is because they're, well, rare.


It is important to distinguish between edible sweet potatoes (Ipomoea batatas) or ornamental sweet potatoes, which go by the same Latin name. Typically, flowering for both types will only occur in southern gardens with hot daytime and night time temperatures as well as long day length. Neither type of sweet potato is grown for the flowering capability. However, if a sweet potato flower does occur it resembles its cousin, the Morning Glory (Convolvulus spp.) mostly in shades of light blue to purple.

[...] If flowering does occur, it is an added bonus and not a necessity to remove the flowers as it is with edible sweet potatoes. 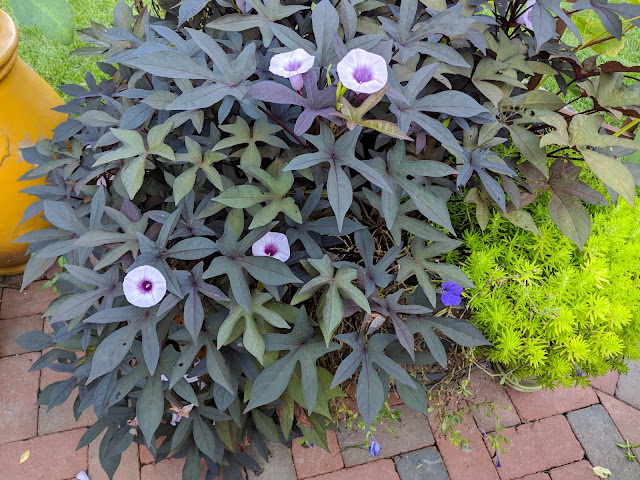 I'm enjoying these while they last.  I posted some of these photos over at my Hornbeam Hill site and also shared on the Hornbeam Hill Instagram account.

Have been putting sweet potato vines in our pots for ten years. And I never knew they flowered. Beautiful surprise.
A post shared by Hornbeam Hill (@hornbeamhill) on Sep 5, 2018 at 5:52am PDT

The  containers didn't do terrible this year, but they're not quite show-worthy, imho.  There are/were components that I really loved.  The Elephant Ears.  Will do those in containers again.  The Lemon Coral Sedum.  Same thing.  Will do that again.    I planted one pot with a grape vine and one with a Clematis vine.  Both were trellised.  Between the beetles and the inconsistent watering, neither of the vines did great.  But, maybe they established themselves enough to come back next year?

The Sweet Potato vine took over and crowded out the Supertunias and I didn't care for them very much in terms of trimming/pruning, so they got leggy.

The other containers were a mixed bag:  I learned my lesson to not plant tuber Dahlias in pots again.  Despite being able to get them started early, I think they were too crowded in one pot.  My basil was - as usual - and after thought and didn't get used much.

I did plant a Chicago-hardy fig tree in a container (the kids call it the Pooh Bear Pot because it resembles a honey pot) and it has started to fruit.  Tiny fig fruits.  But, still.

The other pots didn't cause much attention:  the geraniums that I bought were big and happy.  Sticking them in a pot with a spike and a trailing vine give me an easy-to-care-for container that checks most boxes but provides not a lot of drama.
#hornbeamhill backyard basil clematis container gardening containers fig tree flowers garden diary garden surprise geraniums grape vine hornbeam hill petunias sedum sweet potato vine vines
Location: Downers Grove, IL, USA