Autopia Official Driver License: Now Licensed On Both Coasts At Both Parks 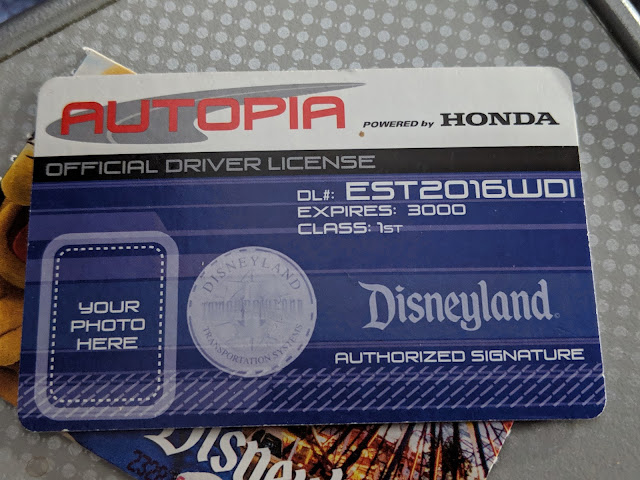 I've written about 'freebies at Walt Disney World' over the years on the blog.  There's the business card that we got from the Mayor of Main Street USA.  He's dead now, so I don't think they're doing this any longer.  There's also an official 'guest skipper' license from the Jungle Cruise Skippers.  And a card from Soarin' that is labeled "Born to Soar" that allows little ones to 'fly' the ride as soon as they hit the height.   There are also plenty of character stickers from various cast members and DVC kiosks like Minnie Mouse and Mickey Mouse.  And you can get a Celebration Pin everyday or special pins on other days like Mickey Mouse's birthday or a special pin if you participate in the Star Wars Jedi Training.  If you look hard enough, you can also find 'job role' stickers like Honorary Custodian or WDW Monorail Pilot.  And there's, of course, transportation cards.

Another one those is the Tomorrowland Speedway "Official License" that you can get at the Speedway in the park in Florida.  Here's the post showing the front and back of that license with Mickey in his Roadster Racer gear.

The top photo in this post shows the front of the license and includes the Honda (sponsor) logo.  You can see that on the right side there's a spot for your photo.  If you look at the exit to the ride, you'll see three photo booths that look like this photo from MousePlanet.  You can customize your license with a photo for a few bucks.  We didn't (obviously) do that!

They've been doing these licenses for a long time and I actually LOVE this vintage version.  Shame they didn't keep it going and went with this very modern Test-track-ish design.

Here's the back of the Autopia Drivers License card - that also includes the Honda sponsor logo. 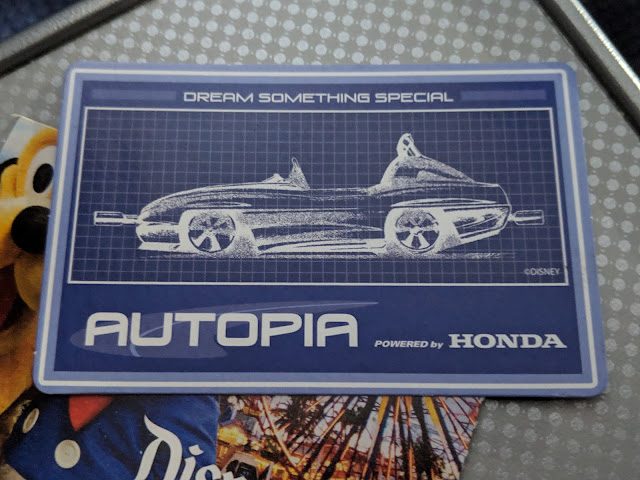 In poking around about the details of this license, I found this post from GetAwayToday Travel that lists all the various freebies around Disneyland Resort.  Their list includes: stickers and buttons, water cups, character autographs and this license from Autopia.  But they also point out a map from the Jungle Cruise.  (what?!?!?  I had no idea this existed!  Will ask next time we go - for sure.)