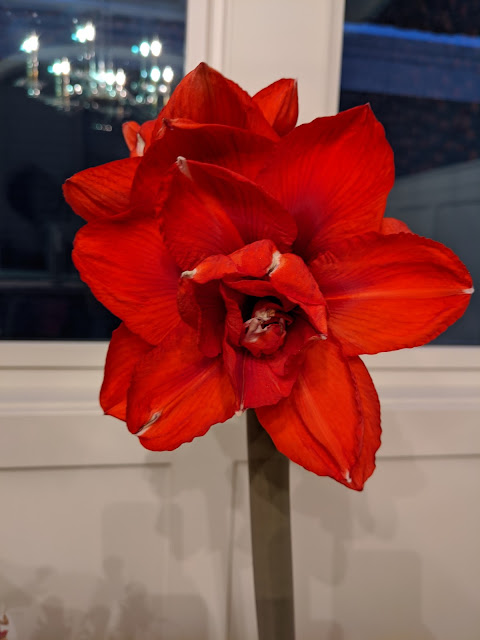 While two of the four Amaryllis bulbs are done flowering, the largest - and most expensive - bulb (bought at Wannemakers) is blooming.  It is a Cherry Nymph bulb that is billed as a 'double blooming' Amaryllis and the moniker is holding true for this beauty.

Potted on November 21st, 2019.
A week in, this bulb showed no signs of growth.
Mid-December and the tip of the first bud was just emerging from the bulb.
Right before Christmas, it was just about 4" tall and thickening up the stem.
On January 2nd, the first stem was up and trying to get ready to open.

For reference, my large bulb in 2019 was just beginning to open up at end of December.
On January 20th of 2019 - 25+ days past Christmas, the bulb was in bloom.
And it was still throwing off flowers well into March.  Yeah....March.

So, this one is blooming (for the first time) about the same time as last year's large bulb.  Will it stay blooming until March?  We'll watch and see. 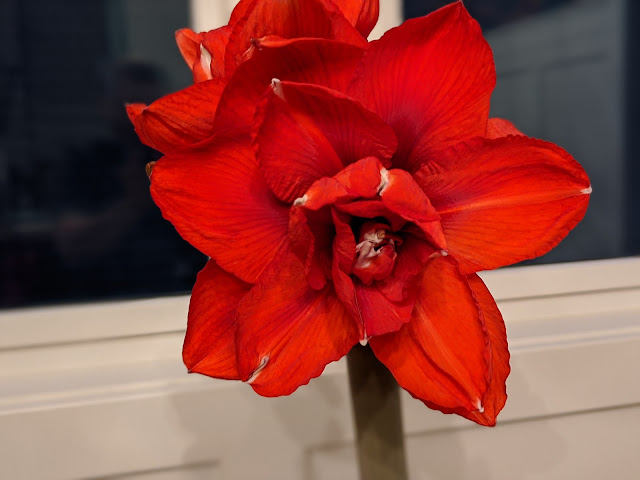 This red flower is quite pretty with a little bit of white in the tips, but primarily a solid red flower.  If you look back at the reference photo on the tag of the bulb, this one measured right up.

One thing to note, this bulb is VERY tall.  I stopped feeding it alcohol (lazy) and the stem shot right up.  I'll post a photo of the rest of the bulbs so show all four of them for contrast in a separate post.  They're all at different heights.  This bulb also has a second stem emerging, so perhaps if I go back to alcohol (diluted), we'll see the difference in heights?