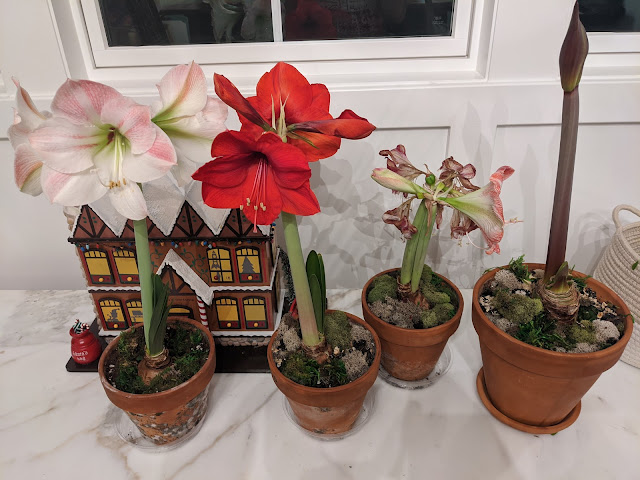 This is the seventh post in the series on this year's (welp...technically, I suppose they're *last* year's) amaryllis bulbs.  The last time we looked that them was right before Christmas on December 21st and 20th.   On the 20th, I showed how the Star of Holland was blooming in a spectacular fashion with four blooms on two stems.  Then on the 21st, I included a few photos showing the progress of the other three amaryllis for the season; Cherry Nymph, Apple Blossom and Red Lion.

We went away for a couple days for the New Year and came home to the four pots you see at the top of this post.

On the far left is the Apple Blossom.  Has fully bloomed and is a beautiful white with some red/pink lines running through it and a light green center.  It is much more pale than the Star of Holland.  I also had just one stem come up on this bulb.   But, it also was the one that was timed the best.  It had it's first open bloom arrive and open fully on Christmas Eve. 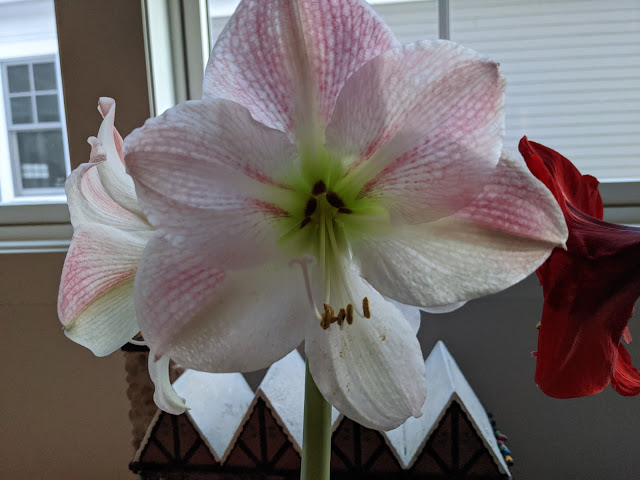 Next to it is the Apple Blossom Amaryllis.  Photo of one of the flowers is below.  It has a beautiful (and seasonally-perfect) red flower that turns darker red as you move into the center.  So far, this has produced two flowers, with two more on their way immediately.  But, this one is showing the beginnings of a second stem, so it will produce for another couple of weeks. 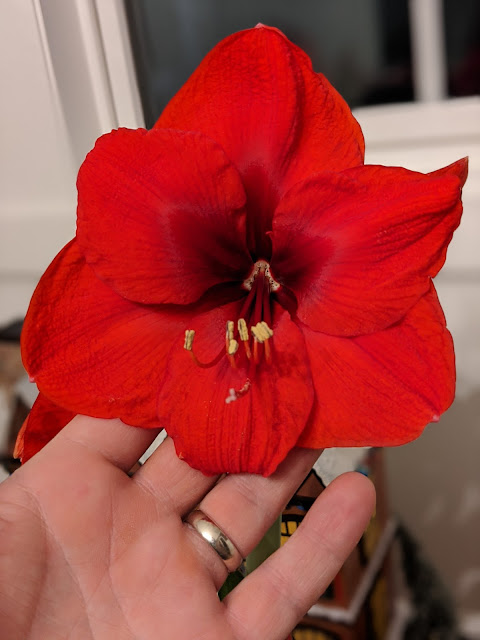 Height-wise, the Apple Blossom and Red Lion are close in height.  Closeup of them below.  The Star of Holland is MUCH shorter, but that might be because I was better about feeding it alcohol? 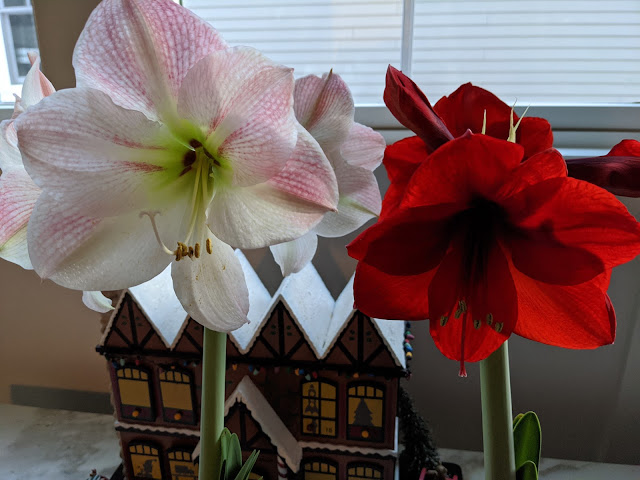 Next - and third from the left in the top of this post photo - is the Star of Holland.  Below, you can see a closeup of where it stands today.  This one is still in bloom with one flower and is about to have another (and I think last?) flower open up.  Back on December 20th, I mentioned that this one was 'showing' for 10 days.  That puts it flowering on December 10th.  Here we are January 2nd.  Three and a half weeks later and it is still putting out new flowers.  Think we'll get past 4 weeks of flowers with this double-stemmed Amaryllis.  And...remember...this was one of those sub-five-fifty-Menards bulbs.  If you look at the photo below, you'll see that I've trimmed off all of the dead blooms and there are a couple of balls or knobs of green stem flesh that remain at the top.  This Star of Holland bulb was a big winner. 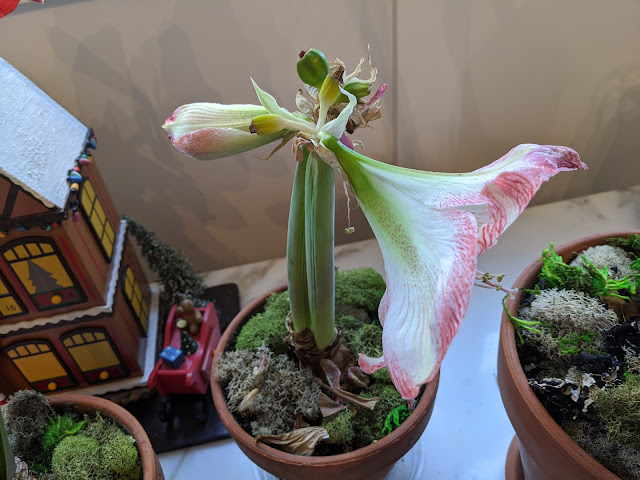 And, finally, the last amaryllis in the photo - on the far right - is the Cherry Nymph bulb that I bought at the Wannemaker's Open house in Early November.  It still - on January 2nd - not opened up.  For comparision's sake, here's a look at my large Amaryllis bulb on December 29th of 2018.  You can see that it is slightly further along than this one.  Also...it is much stouter/shorter.  Must have been better about the alcohol watering?  Last year, I didn't have any Christmas blooms.  This year, if I went with *just* the Wannemaker's bulb, I wouldn't either. 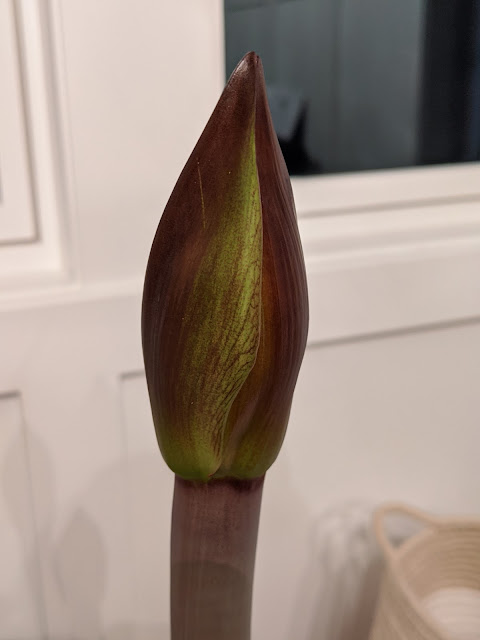 However, January - which is the worst month of the year (amirite?) is looking promising.  With this big, thick stem and the first bud.  Followed by what appears to be another sizeable bud emerging from the bulb that you can see in the photo below: 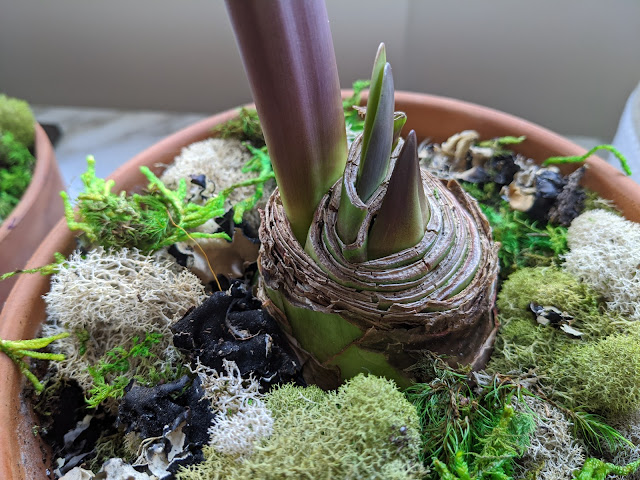 One other thing to note on this year's bulbs:  We used brand new clay/terracotta pots from Home Depot.  And all of them ended up with some mold on the outside.  A few of them (see below) have gone dark mold along with white.  While the largest pot went mostly light white.  I'm going to spray a little bit of disinfectant on them and wipe the mold off to see if it comes back? 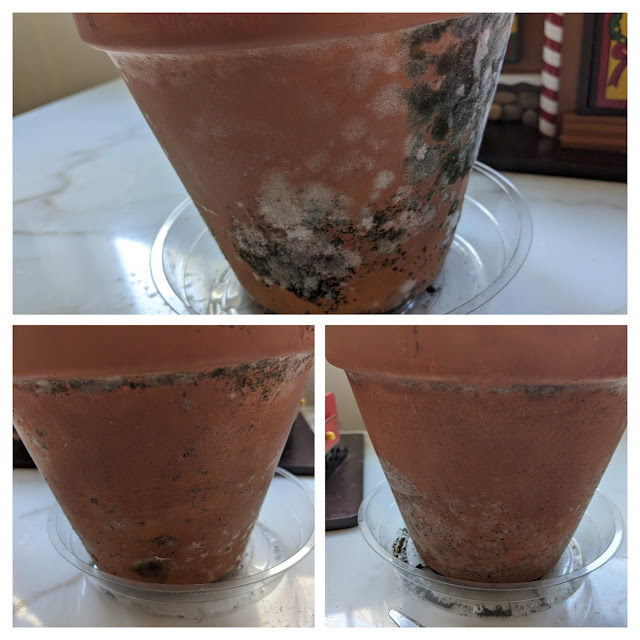 When the Cherry Nymph full blooms, I'll revisit these on the blog.  And then maybe will have a little bit of a 'lessons learned' that is more formal than this one.  But, before that, a few things have emerged as certain: