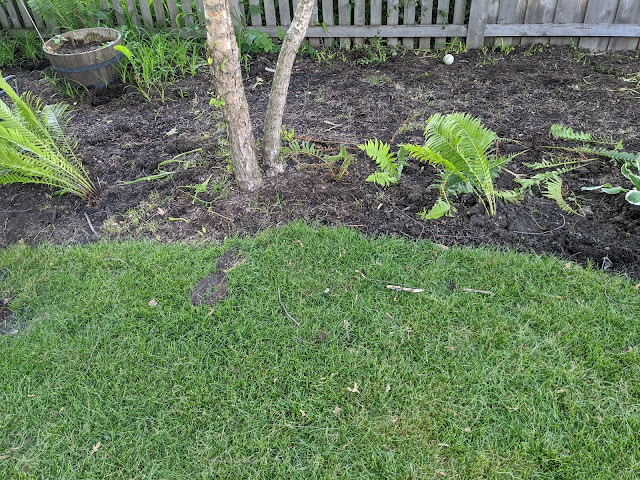 I've posted a number of times - across houses, towns, years - about Ostrich ferns.  We had them back in Elmhurst at our old house.  And when we moved, we transplanted a few clumps of them over at Nat's Mom's house in Naperville.  When we bought our lot in Downers Grove, we inherited some of what I've been calling "Survivor Ferns" that lived through the construction and re-grading of our lot.

As part of my 2020 to-do landscape list, I identified area #2 that includes the planting of a series of Ostrich Ferns - along with other items.  One of those 'other items' is the planting of hostas around a large Oak tree - in an area adjacent to where these Ostrich Ferns are supposed to be planted.  I posted about those variegated hostas yesterday.  The plan calls for Hadspens, but I decided to go with Variegated hostas because I had quite a few of them on hand.

In that Priority Area #2 post, I mentioned that the plan called for 12 Ostrich Ferns in this area.  And earlier this Spring - in May - I started by transplanting one fern in the spot.

I also showed off this new bed in a post earlier this year when I cut it out of some ratty turf'd areas and laid down a fresh, new layer of mulch.


In the photo at the top of this post, you can see even more of these Ostrich Ferns that I've moved into this area.  I've found that Ostrich Ferns don't transplant particularly well - and look terribly in their first year.  But, with a little bit of watering, I've found them to typically come back and return to their more vase-like form in year two.  It is hard to tell how many are in there in the photo at the top.  But, below is - in red circles - some of the "bases" of the ferns that I can count in the photo.  There are nine circles, but one more fern to the right - out of the frame - that makes for ten.

One thing to note in the photos is that you can see a multi-trunk tree that these are laying around:  that is the River Birch tree that we inherited that has three trunks.

Looking at the pieces of Priority Area #2, I think we're getting close to having this area baked - and for sure - checking the box on this year's list.

Create the bed.  Done.
Plant some hostas around the Oak tree.  Done.  And done.
Planting a Lenten Rose/Hellebores.  Planted one.  So...kinda done.
Planting/transplanting some hostas (blue ones) under the Hornbeams.  Done.

I also planted eight apple trees for a Belgian Fence - which is a new thing - not necessarily part of Area #2.

Still have to plant a Viburnum or two along the fence.  Remove/relocate the American Elm tree for bonsai, a couple of Alice Oakleaf Hydrangeas (or...maybe not) and some Bottle Rocket Spiked Ligurias.  But, that stuff can come later when we have the time and budget to finish things out.
ferns garden diary landscape plan landscape priority ostrich ferns shade gardening transplanting
Location: Downers Grove, IL, USA