Here I was...thinking I'm writing a post that is going to knock a HUGE item off my 2021 to-do list in the yard.  But, when I went to go look up what number "cutting new, larger curvilinear beds" was on the list...imagine my disappointment that it isn't one of the 25 things.  Womp, womp.

But, it is still a big deal for me and a big milestone for the yard.

First, a review of a few things:  Starting with curvilinear bed design.  I covered where I wanted to go with our bed layout and how we had a bunch of "little" curves/bumps in our current beds - while the ideal state is very few, larger, swooping edges.  As Sue from Not Another Gardening Blog pointed out, these big, swooping curves are hard to pull off. I went through three colors of spray paint trying to get the curves right.  And, I think I got them like 90% there - with just a little bit of cleanup having to come in the next few seasons.

Second:  a note about the "order of operations" I laid out in March.  I said that in order to get these beds, done, I had to do a few things - in order.  Starting with removing the Automower wire (done), move the stuff laying around like the firepit and firewood (done) and then, extend the beds (this post).  Once that's done, I can move on top:  transplanting, plant new stuff, make some hard calls and cut things down/out, weed/feed and (finally) add this year's mulch.

Before I show the before/after photos, a quick mention about the 2021 to-do list.  These beds aren't DIRECTLY on the list.  However, #3 was to work the 'between two driveways" area by 'finishing the bed'.  As part of this backyard work, we cut that bed to have new edges.  So, I'm calling part of #3 done.  Also, #21 on the list was to relocate the firepit by creating a little 'nook' and cleaning up the firewood back there.  I haven't set the firepit.  But, I'll call this one partially done, too.

Ok, now on to the creation of the beds.  As I mentioned, I spent a bunch of time trying to figure out how to create these with just two big curves on each side.  After a bunch of trial and error (and working on my third can of spray paint), I ended up settling on an approach that utilized stakes and fixed lengths of string.

You can see how I went about it here in the photo below.  I chose a fixed distance that I wanted the lawn to be consistently across the yard.  Then, I stretched two stakes apart with that distance fixed.  That meant that when I stuck one side in the *right* spot, I could stretch the other stake across the yard and that point would be in the right spot to have the curves match.

Now, I used that technique for MUCH of the yard, but I called an audible in a few spots.  But, if you were doing this same thing, I think that would work for you.

I wanted two 'bumps' on the right side.  And two 'bumps' on the left.  Both incorporating the large Oak trees on either end.  Here's the before below (notes for the garden diary:  the dark green streak in foreground is from the sump pump discharge making that grass grow like crazy.  The green 'dots' in a polkadot pattern aren't from Lizzie. They're a result of Davey treating those trees last Fall with a fertilizer program.) 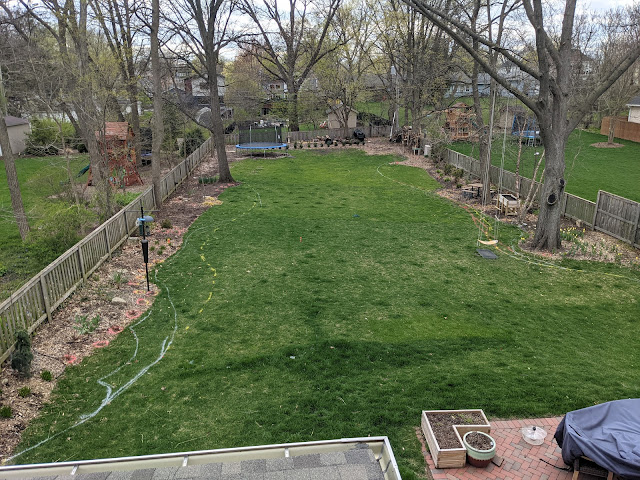 You can see the various versions of painting the new edges - none of which I was thrilled with as I looked at them from above.  So, over the course of a few days, I settled on getting a few of the curves right and being "ok" with some that weren't perfect.
And, here's how it ended up below:  two curves on the right, two curves on the left.  And a couple of nice 'nooks' created once I plant them out in the back.  Also, a TON more bed space that I'll need to fill both with plants as well as (this year) mulch. 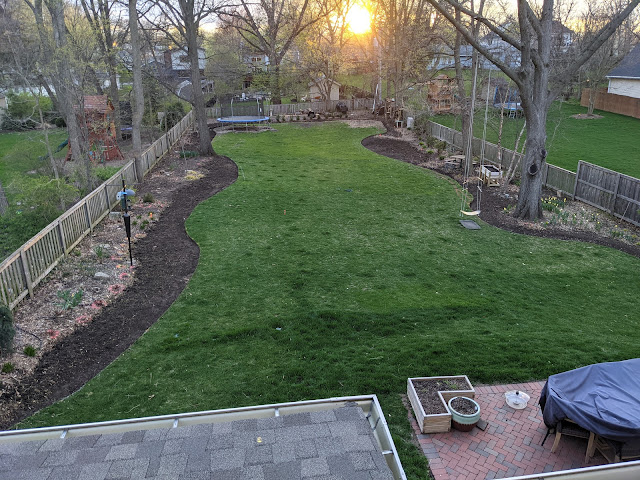 This feels like an important moment in the evolution of our yard.  We still don't have the 'entrance' finished.  Or, frankly, even started.  But, I'd say (in the history of the backyard), we have some key elements in place/milestones reached:
1.  Fence in place - 2017.  Set the boundary of the yard.
2.  Pair of Linden espaliers planted - 2017.  Important view from the patio.
3.  Frans Fontaine Hornbeam Hedge planted - 2018.  Screening from neighbor to the north begins.
4.  Began to get serious in working the turf in 2019.  Proactively addressing the weeds, too.   I also created my 3-bin compost setup which I've been using since.
5.  And last year, I planted the most significant set of hydrangeas along the south fenceline in 2020 to begin to establish the final landscape plan.
The creation of these final bed edges is right up there with those other items and is something that I can TOTALLY build on going forward.  In particular, I can begin to move plants that I've acquired to their final resting places and begin to buy the items that the plan calls for - and some audibles that I'll call along the way.
This was a good day where our backyard grew up a little bit.
Before/after in one spot below.  Looks better, no? 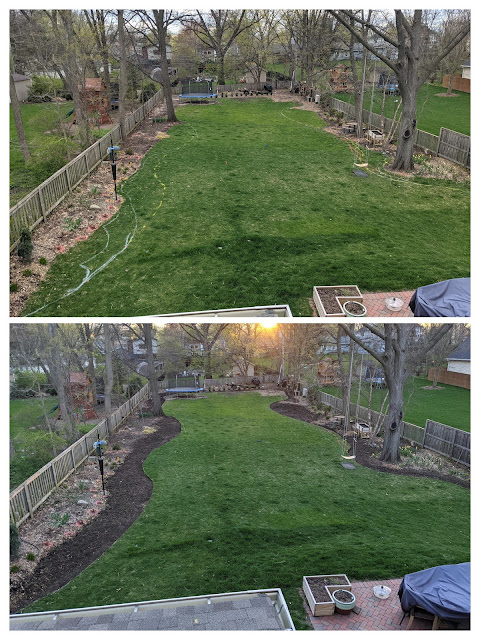