Posted by Jake Parrillo on April 20, 2021
Back in early March, I transplanted our original Disneyland Rose from our backyard to our sideyard where it joined the pair of other Disneyland Roses which are thriving in a sunny spot along the house.  I had never moved a rose before, so I read up on when/how to make the move and tried to follow the best practices:  pre-dug the destination hole, timed it before the bush came out of dormancy and waited to prune it back until a few weeks AFTER the transplant.
This week, I went over to check on all of the Disneyland Roses (and to confirm the potential location for a pair of espalier'd trees along the house there) and wanted to see the difference between the three floribunda roses.
The pair of Disneyland Roses that were there pre-transplant were put in the ground in Fall 2018.  And, I mostly neglected them.  Despite the lack of attention, they thrived and flowered.  And this past Winter, I tried to protect and overwinter them with a ring of leaf mulch.  Seemed to work.  The three roses were pruned earlier this month and now, I'm seeing this season's growth begin to emerge.
But, there's a pretty big difference.  Here's one of the existing (non-transplanted) Disneyland Roses below.  Lots of green leaves.  Dare I say 'thick leaf growth' in spots.  The tips are leaf'ing out.  Seems very happy. 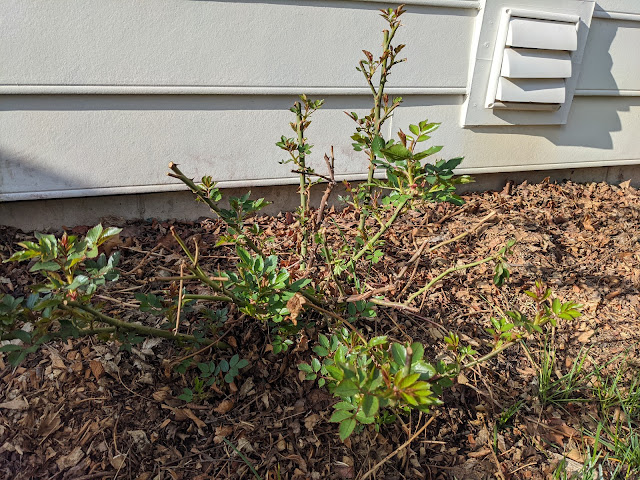 And, here (below) is the Disneyland Rose that I transplanted earlier this year before it broke dormancy. Clearly not as much green growth.  Now...that certainly COULD be transplant stress.  And, I think likely is the case.  But, also, I let this one get pretty leggy.  It was being strangled by hostas and thus had to grow up and out to try to get Sun.  Have a look at the photo in this post from last October.  The one that I ultimately transplanted was narrow and tall.  The other ones were spread out.   In the photo below, you can see that I pruned away *some* of the height/legginess.  But, I was afraid to prune too hard.  Transplant stress + over-pruning seemed like a recipe for rose decline. 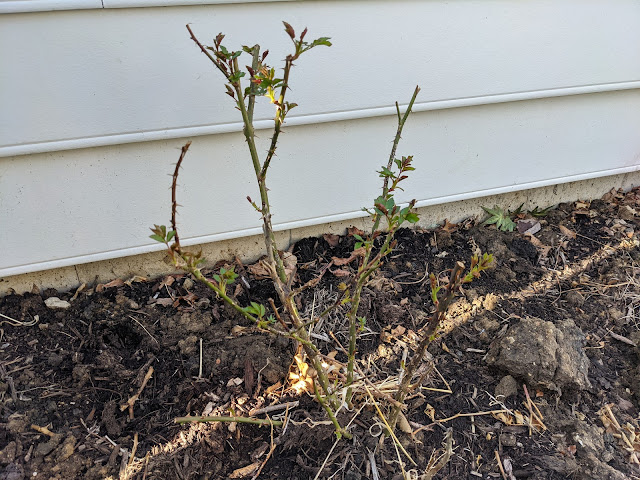 For now, I'll keep an eye on all of these.  Soon, they'll be covered in mulch.  But, before that, I'll have to go try to grab some rose food and put it down before they get too far into growing this season.
cut flowers disneyland rose floribunda roses flowers garden diary roses sideyard spring growth