I have been eying the addition of some Japanese Painted Ferns to our backyard all this growing season.  I have one that I planted on the north side of the screened porch in 2018.  It is a Athyrium nipponicum 'Pictum' and it has done really well on it's own over there mostly being left alone.  Here's what it looked like last Fall/late Summer in August of 2020.  And in Priority Area #1 from this year, I was thinking of using Japanese Painted ferns instead of the (currently) spec'd Ostrich Ferns.

When I was at the Morton Arboretum Spring Sale, I came across these painted ferns and I ended up buying four of them to add to the backyard. 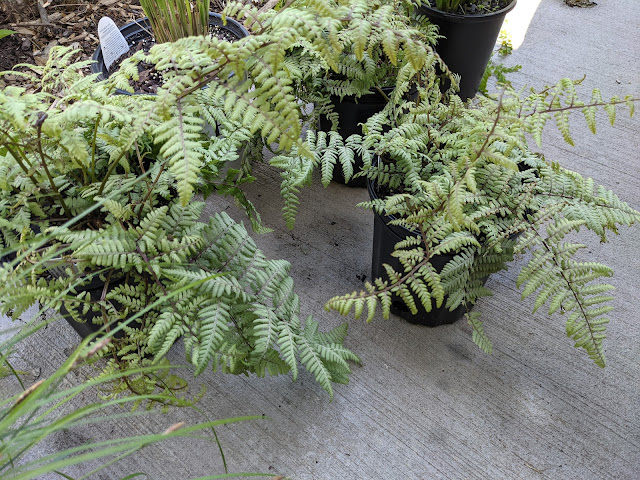 Here's the tag (below), which shows these aren't the same "Pictum" ferns that I had already, rather they are called Ghost Japanese-Lady Ferns.  Athyrium 'Ghost' and they're described as a 'hybrid with the best qualities of Japanese Painted and Lady Fern'.  Kinda great, right?  I have one Lady Fern, so thought these would be a nice addition to the backyard. 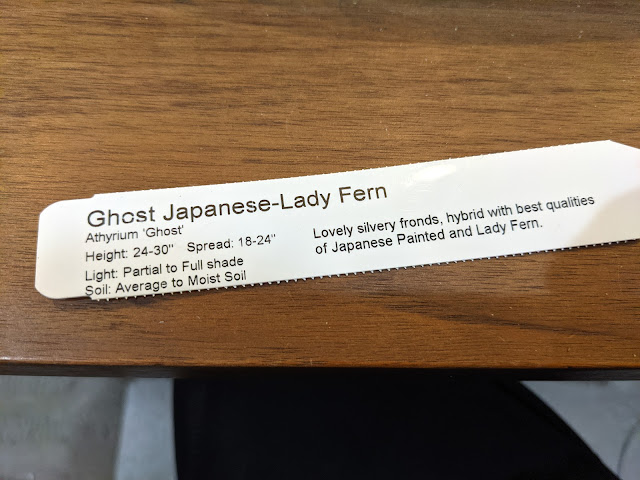 I mentioned that these could go in Priority Area #1, but due to the new firepit area location (and potential path), I decided to skip that planting and chose to put them in Priority Area #2 - right in front of the Weeping Nootka Falsecypress tree that I recently planted.   You can see the four ferns planted below.  Need to lay down some of that new, fresh mulch to get these watered in ahead of the heat that is coming this Summer.

The shuttlecock habit of Athyrium ‘Ghost’ comes from the lady fern, while its foliage color is akin to Japanese painted fern. The silvery green fronds were similar to but lighter in color than ‘Branford Beauty’. The fiddleheads emerged purple but only the rachis and some veins held the purple coloration when the fronds were unfurled.  ‘Ghost’ had a strong vase-shape with distinctly upright fronds. This hybrid fern was slower to emerge in the spring than Japanese painted ferns. ‘Ghost’ was generally not as affected by heat or drought as other ferns, but suffered severe rabbit browsing in 2003.

The note about how it is 'slower to emerge in Spring' is a helpful reminder.  Don't write these off next Spring...they might just be slower to pop thru the mulch.
Here's the four of them planted (below): 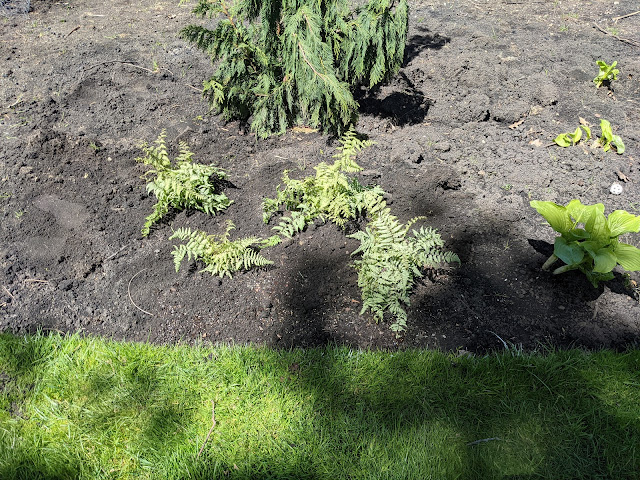