Menards Halloween is Up - August 2021

The team at the Bolingbrook Menards has begun to transition away from Summer/camping/back-to-school in the seasonal section to the best part of the year:  early Halloween - which gives way to early Christmas.  That means they have inflatables, window clings, a small amount of generic "fall" stuff (you know...it says things like 'give thanks' and what-have-you) and their spooky village.

Here, below, you can see some of the inflatables they have this year.  They're also adding some non-inflatable "creatures".  Dragons and such that are meant for the front yard and have some motorized movements, but not inflatable.    This row of inflatables features just one licensed Halloween inflatable:  a Frankenstein Minion halloween inflatable.  The rest are Menards house-brand, something called "Pumpkin Hallow".  They have this skeleton popping out of a jack-o-lantern, the dragon (you can see part of him on the right) and something they call "4' bat".  But, he's really a blue vampire.  There were no inflatables at our store that were as cool as the HUGE, moving inflatable spider that they had a few years back. 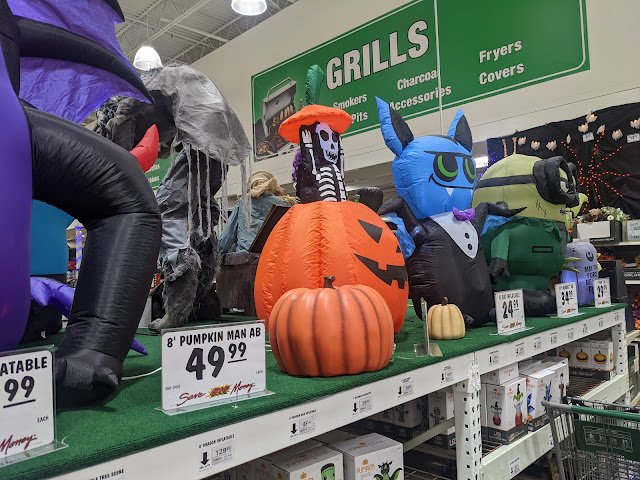 I've posted about the Menards Halloween section over the years - usually in August.  The first time was nine years ago tomorrow - August 27, 2012.  Then, it was three years later - August of 2015 when I shared some Menards Halloween photos again.  In 2016, we visited again when it was setup - late August.

2017 - when they had a really big Lemax Spooky Village.  And, again in 2018. 2019, I posted some Disney-related stuff from our Halloween visit to Menards.  They didn't have much of that stuff at all this year.  Or, at least, they haven't put it out yet.  I don't seem to have posted about the Halloween setup last year (Thanks, COVID).

But, I'll tell you that this year wasn't awesome.  Maybe a combination of (at least) four things?

1.  We went to the Bolingbrook store.  That's an 'older style' store.

2.  Maybe all the stuff isn't out yet?  Because there wasn't a ton of things.  Maybe just three rows plus a small Spooky Village.

3.  COVID-impact?  Is what they've put out mostly left-overs from last year?  Did they have supply-chain issues in getting stuff landed this season?

4.  The trend towards their own house brand.  Pumpkin Hallow is picking up steam in all decoration categories and they're carrying a ton of house brand merchandise.  I mentioned above that most of the inflatables are house brand.  Wait until I post about a few of the Halloween Village buildings I saw.  There were just two that were Lemax Spooky Town.  The rest were "Pumpkin Hallow".

I'm hoping that Christmas will be better.