Fall shrub planting has included 8 Hicks upright Yews - in 2 locations so far.  First the pair for the (eventual) Block I topiary.  And then, last week a very SMALL hedge (in planning stage) of six more Yews along the south border in the backyard.   And a trio of dwarf Green Gem boxwoods.  Today's post is almost a year in coming but features two more upright Yews - planted close to the fence in one of our shade beds.

You can see one of the two #1 Yews that I planted in the ground in the photo below: 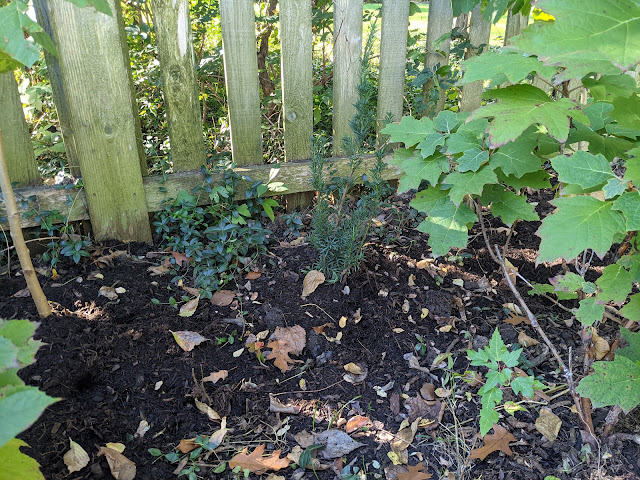 I say that these Yews have been in the works for close to a year because it has taken me that long to complete the various steps that I needed to do in order to get these Yews in the ground.
First, I suppose I should explain the WHY behind these yews, their location and what I'm trying to accomplish with this planting.
I've posted before about learning from and gaining inspiration from Amy Fedele at Pretty Purple Door including her shared love of narrow, columnar trees.  And her advice on color combinations lead me to adding in Yellow tulips with our red and oranges.  Amy writes practical advice for people like me - on the beginning of their garden and landscape journey on her site and on YouTube.
She also sends out emails that contain ideas, guides, tips, experiences and her POV on some of the fundamentals of gardening.  If you haven't signed up, you should do so at her site here - where you can grab one of her guides.
Earlier this year, she sent out an email with the subject line:  "An unpopular opinion about evergreens" where she talked about her POV on the order/level of layers of planting in regards to wood shrubs and evergreens that people should plant things related to structures like foundations.
I'm posting a screenshot of the intro to that email below because she doesn't seem to provide those 'view on the web' links that some newsletters include.  Again...you should go subscribe here.   Here's how she opens up her note and mentions not putting hydrangeas all the way in the back - in this case - 'against a foundation'.

She then goes on to include this sketch showing what she's talking about (again I want to be clear here:  This is NOT my sketch below.  I'm posting it here because there is no web link to it.  I've included links to similar source material in the captions.  Also...once again: If you are interested in learning about gardening...You should subscribe to her newsletter here.  Or, go read her gardening in layers post here for the same info.

Shrubs BEHIND hydrangeas - as you look at them.  Well...that makes ALL the sense in the world, doesn't it?  The problem?  (At least...the problem *for me*?)
Last year, I planted a series of Alice Oakleaf Hydrangeas back in Summer of 2020.  And they were (per my plan) the shrubs that were going to be the 'last layer' right up against our fence on that side.
But, the rationale she laid out above - adding an evergreen layer BEHIND a deciduous shrub for the best all-year-long look - hit me between the eyes.
The problem was (now) their location.  All of the Oakleaf Hydrangeas did just fine their first growing season, but (earlier this year), I knew I had to move them up a bit.   You might recall this 'Order of Operations' post I created this Spring. I was planning on extending some of the beds.  Including the area in front of these Hydrangeas.  Pushing out the border would create the space that would allow for a planting *behind* them.
So, I moved them.  Back in July of THIS YEAR, I posted a look at a few of them in bloom and mentioned that I moved them early in the season - for a reason.  Now...you know the reason.  From that July post:

I initially planted all seven in a group, but after just one growing season, I realized that they were too close to the fence. They would have been fine in their spot, but when I say 'too close' to the fence, I mean that I want to plant some things *behind* them. (More on that in a different post to come.) Thus, I dug up all of them and moved them out a few feet from the fence. 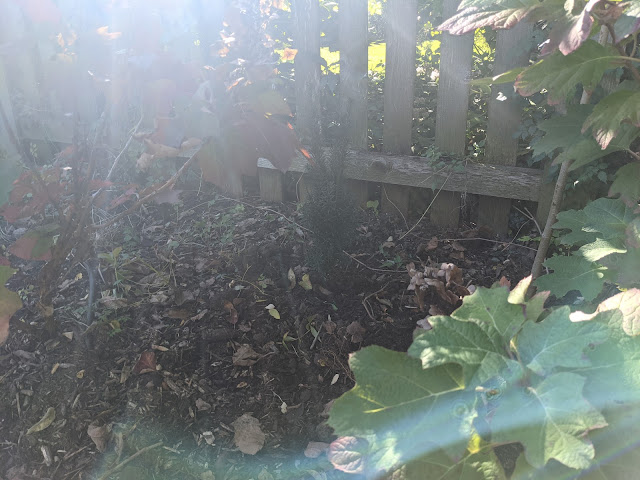 Why just two?  For no other reason other than that's what I had on hand after planting the other spots of Yews.  Could I use a few more?  Certainly.  Maybe next year.
If you look closely at both of the photos, you can also pick up the thin trunks of the London Plane Tree 'Bloodgood' trees that I planted along the fence - that will (hopefully) be pleached into a what I'm calling 'leaf boxes on lollipop trunks'.
2022 plant wish list backyard beds evergreens fall planting garden diary hedge hicks yews layering oakleaf hydrangeas pretty purple door shade gardening shade shrubs vertical interest yews
Location: Downers Grove, IL, USA