Posted by Jake Parrillo on September 02, 2022
The time has come for the backyard Fall lawn project.  What I thought was going to be a total renovation - killing everything and seeding from scratch - has turned into a combination of patch seeding and total overseeding in a couple of ways.  Once I was able to positively identify that I had an infestation of Nimblewill (a warm-season bent grass), I opted for a selective treatment called Tenacity.  After a couple of applications, the spray began to work and has turned the tips of the Nimblewill white as it begins to kill it off.  The killing and eradication of the Nimblewill isn't going to be done in this one season, but rather will be a multi-year program.  But, with the application of Tenacity (while the Nimblewill is/was growing), I think I've begun to defeat it.  And allow for the application of a new batch of grass seed that will (I hope) take off and begin to grow in the final six or so weeks of the season.
The backyard is a case study in three parts.  The first third - the closest to the patio - is Kentucky Blue Grass and was planted as sod.  And, a little bit of Tall Fescue that I planted as seed last Fall. The second third is a VERY fine grass that was planted as a seed.  This is a section of Fine Fescue that was planted because it is pretty shade-ready, but it looks VERY different than the bordering KBG.  The back third is what we inherited back there.  It is a mix of KBG and a LOT of warm-season bentgrass (Nimblewill), some crabgrass and what I think is various grass cultivars like Perennial Ryegrass.
Across the whole lawn, I've gone about trying to kill (or injure) all the Nimblewill and Crabgrass. My plan is to make all three sections of the backyard a combination of grasses.  That started by planting some Tall Fescue in the first third last year where the KBG was struggling.
This year, I'm going to put down 20 lbs of Tall Fescue seeds.  And 10 lbs of Kentucky Bluegrass seeds.  Here, below, are the two bags of Schultz grass seeds that I'm using.  On the left is the Tall Fescue.  On the right is the Kentucky Bluegrass. 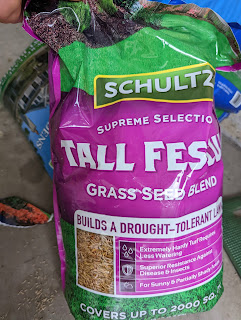 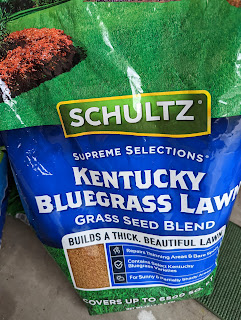 These are bags that were a good value (at Menards), but are made up of MOSTLY actual varietal of grass seeds.  Below are the labels.  First, the Tall Fescue - which is 40% Barmesh Tall Fescue, 40$ Barrepair Tall Fescue and 14% JT-783 Tall Fescue.  Based on what I've read, all three are from Barenbrug and are "RTF" versions -  Rhizomatous Tall Fescue seeds - that have these characteristics: they spread by rhizomes, are better at handling dry conditions, work in shade and self-repair. 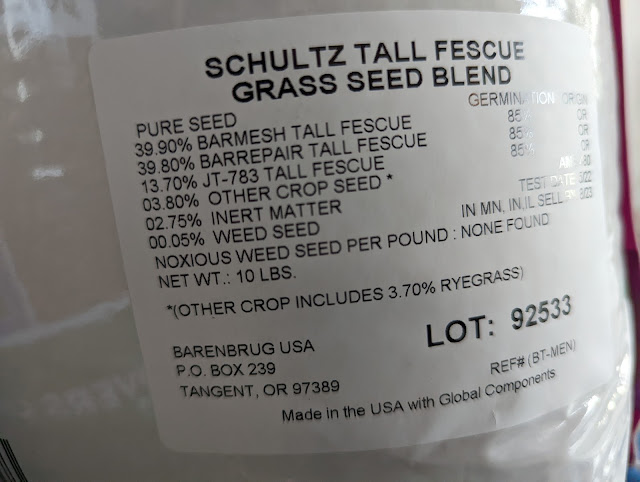 The Kentucky Bluegrass bag is also "mostly" actual KBG seeds.  72% Action seeds, 15% Barduke seeds and 10% Baron seeds.  All three of these appear to be from Barenburg, too.  Action details are here and is a good drought-tolerant seed.  Barduke is know to be fast-germinating (that's good).  And Baron is known to be a top-performer. 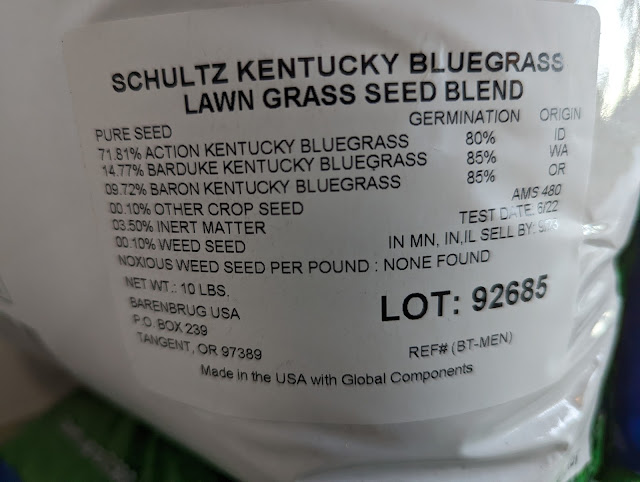 So....knowing I have 20 pounds of Tall Fescue and 10 pounds of KBG, my plan is:
For seed distribution:
This year, I'm trying something new in terms of seed prep.  Instead of spreading and waiting for germination, I've decided to try something that I saw on YouTube:  pre-germinating seeds in buckets.  I took all of the KBG and half of the Tall Fescue seeds and put them in paint-strainer bags.  And have been keeping them submerged in buckets of water for five-plus days.  I've been changing the water twice a day (as was recommended).  Here, below, are the buckets of seed that I've been soaking: 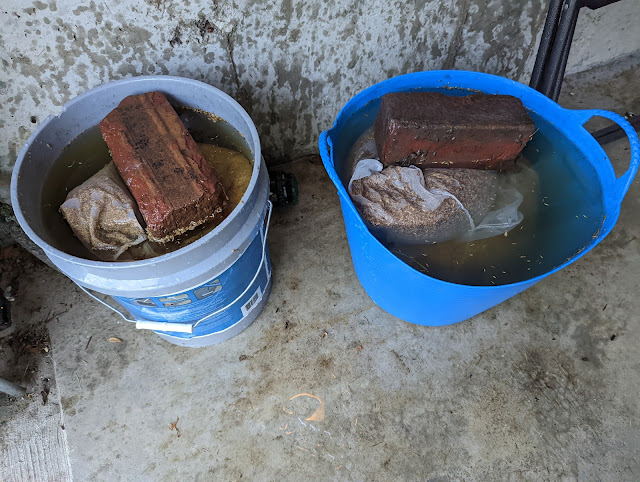 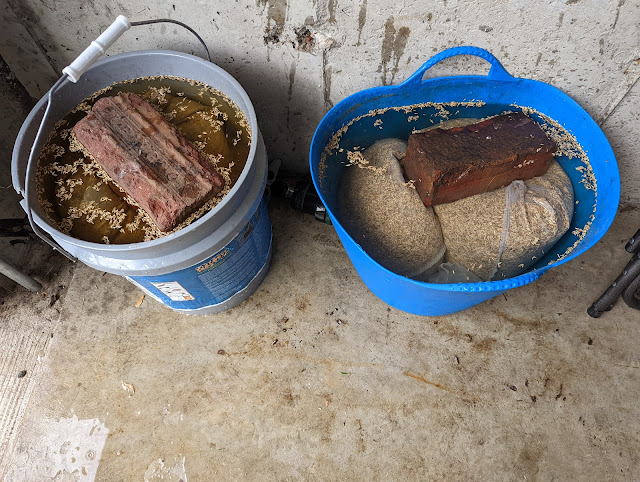 My plan is to mix these soaked seeds in a 1:5 ratio of seed:milorganite (or...in my case...e-corganite from Menards) to allow the wet seed to actually be 'spreadable' in the broadcast spreader.   I'll then lay down the other bag of tall fescue as a 'dry seed'.
One of the hard parts with KBG seed is the long germination period - sometimes up to 14 days.  From what I've watched on YouTube, a five-plus day soak will cut off as much as half from the germination time.  Tall Fescue on the other hand can germinate as soon as seven days.  That means that we'll be seeing sprouting of seeds in as little as two days.
Will this experiment work?  I'm not sure.  Key things seems to be getting good 'seed-to-soil contact'.  I'll be watching that as I spread this stuff out.
First up...I'm going to scalp the lawn and use my Groundskeeper rake to try to remove some of the thatch.  Then, seed and a strong watering schedule to keep it wet for the first week or so.
2022 lawncare 2022 to-do list backyard germination grass grass seed kentucky blue grass lawn lawn care schedule lawn renovation Nimblewill overseeding pre-germination tall fescue
Location: Downers Grove, IL, USA