Late last season, I planted six small upright Hicks Yews in a little row about half-way back in the southside bed of the backyard.  My thought was that I was going to to try to bring a little bit of repetition to the landscape by trying to mirror or repeat the Hicks Yew hedge that I've been growing along the back of our property.   They all seemed to have done just fine this season, but earlier this Spring, I undertook a shrub project that involved relocating the four Lilacs from this area and replacing them with three Green Giant Thujas.  If you look at this post showing the planting of the Thujas, you can see the six small Hicks Yews.  In that post, I talked about how I needed to relocate some of these Yews and with the temperatures dropping, I was finally able to get around to starting that relocation.

Below, you can see one of the Green Giant Thujas and a hole in the mulch directly in front of it where I dug the Yew out of as it was a pretty tight fit. 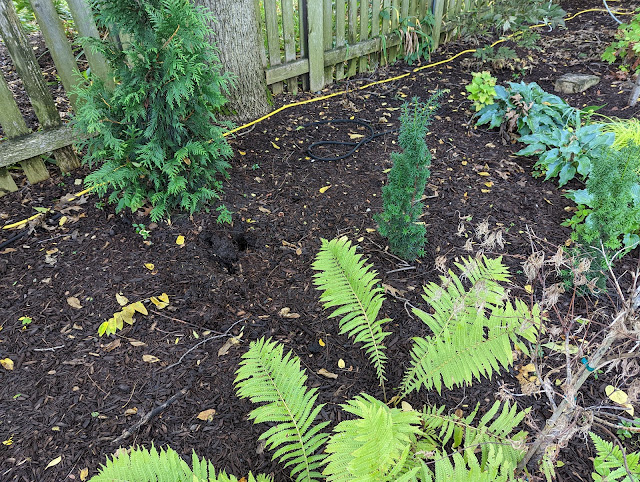 I decided to keep it in the same southside bed and there's precedent for doing just that with Hicks Yews.  Here's a post showing how I tucked an upright Yew *behind* some of my Oakleaf Hydrangeas last Fall in service of 'garden layering'.

So, where did this one go?  A little closer to our patio, right at the end of the row of three London Planetrees and right behind one of the dwarf Oakleaf Hydrangeas.  You can see that location below: 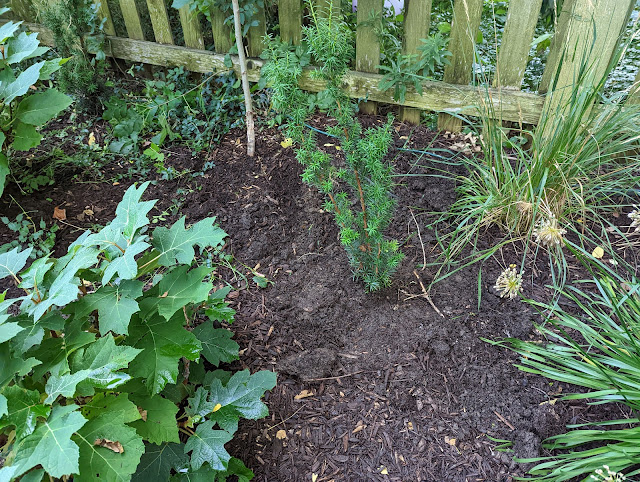 Based on the oldest Yews we have in our garden, it will be at least three more years until this shrub amounts to anything.  But, having an evergreens has always been something our garden has lacked, so pulling even more of them up closer to the house, so they can be viewed during Winter, is a good thing.
2022 to-do list backyard evergreen shrubs garden diary green giant hicks yews layering shrubs southside thujas transplanting yews
Location: Downers Grove, IL, USA