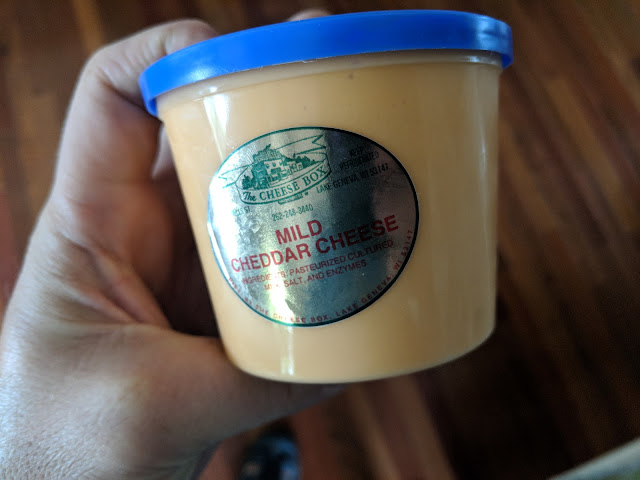 I've written numerous posts about club cheese.  It (Club Cheese) is my preferred version of cheese.  Better than cubed or sliced.  My personal favorite is the King of Clubs from Mars Cheese Castle, but I also really like the Bucky Badger Club Cheese - which is far easier to buy.

On a recent trip up to Wisconsin, Nat wandered into a place called The Cheese Box.  She said it reminded her of Bobby Nelson's, but much closer to home.  On their homepage, they show the inside of the shop and their counter.  Looks like a place I'd love, right?

She came home with a few club cheeses including this Mild Cheddar - which was awesome.  This is private labeled for The Cheese Box, but they're not making it, I don't think.  They do, however, make their own curds and Nat scored a container of those (that didn't last very long).

This Club Cheese didn't last long, either.  Once we opened it, I slathered it on thick to pretzel thins and as it warmed up after coming out of the fridge, it was spreadable.

Where does this land?