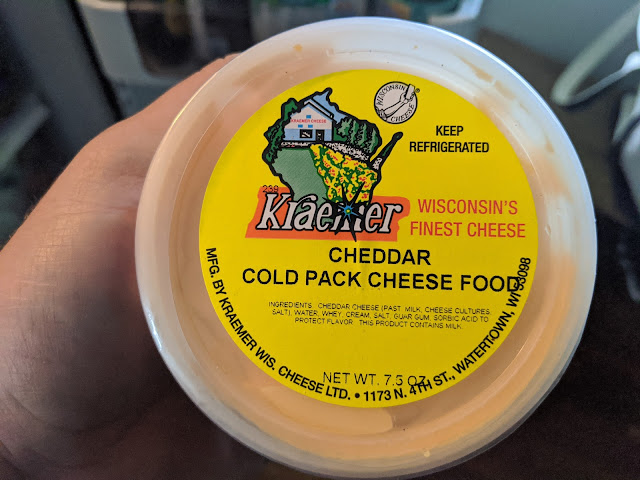 It has been a while since I covered a new Wisconsin club cheese - with the last one being back in 2018.  That club cheese was from the Cheese Box in Lake Geneva; which we haven't been back to as they're taking the pandemic pretty seriously and are only doing curbside.  In terms of my favorite(s), the King of Clubs from Mars takes the top slot.  I found the Bucky Badger stuff to be right up, there, too.

They both are smooth and spreadable.  Just like my gateway drug: Merkts.

This post is about Kraemer Cold Pack Cheese that Nat picked up at a roadside stand.  I think she was there buying corn and saw this and grabbed a container of it - because...well...she's the best.

When it warmed up to counter-top temperature, it stayed crumbly, but it was more able to form 'clumps' of sorts.  The flavor was great, but the crumbles keep this from being top tiered.  Perhaps that's a sign of being more 'fresh' than the rest of them? The label doesn't include a lot of preservatives, but does list Guar Gum (usually as a stabilizer) and scorbic acid (which, they say is to "protect flavor), but I'm not sure is a thing?  I see plenty of talk about "ascorbic acid", but nobody talking about "scorbic acid" (without the 'a').

Now, this makes me wonder if I should be ranking these in order or by score.  Kinda like either the Dave Portnoy One Bite reviews - where he scores pizzas on scores of 1-10.  Or, if there should be a scale - like Robert does with recruits on IlliniBoard (1-5 'Tom Cruises')?

If I went the Tom Cruise "Looks like University of Illinois" way, I'm thinking that I'd go with Chet's?


Like...how many Chet's would the King of Club get?  If the scale is 5 Chet's, then, King of Clubs would get at least 4.5 Chet's, right? So, something like this Kraemer's cheese would score something like 3.25 Chet's that I'm showing below?  Is a scale of 5 too limiting?  Might be.

Now...back to this Kraemer Cold Pack Cheese.  The tub is small - not like the King of Clubs or Merkt's.  The folks at Kraemer Cheese seem to updated their logo online, but it hasn't made it to their packaging just yet - and it looks really nice.   You can visit them at their store in Watertown, Wisconsin, but that's up north about as far as Madison, so we haven't been there.

They offer a variety of flavors of what they call - on their site - "Cheese Spreads" (despite the packaging being labeled as "Cold Pack Cheese") with everything from variations on cheddars (cheddar with garlic, cheddar with Jalepeno, Cheddar with Horseradish) to more adventurous flavors like Brandy Old Fashion, Buffalo Wing and Smoked Gouda.

I'm guessing they made the translation to "Cheese Spread" vs "Cold Pack Cheese" for their online orders to encourage more people to buy them. Wikipedia has an entry for cold pack cheese that describes what it is and I've mostly been using that term, but I also could see room for a series on "Wisconsin Club Cheeses", right?

So, if I'm doing an ordering of the Club Cheeses that I've reviewed, I think they'd rank this way:

But, that ranking doesn't really show the scale of the difference between the King of Clubs and that Brewster House spread.  There's a real gulf between the two, which makes me think. that I need to be giving a 1-10 score instead of simply a ranking.

I suppose that means I'll have to go back and re-review all of them and apply a score retroactively?  But, would that be fair - or perhaps I should just be scoring things going forward.
cheese cheese spread Club Cheese cold pack cheese Made in Wisconsin wisconsin Wisconsin Cheese
Location: Wisconsin, USA