Posted by Jake Parrillo on July 31, 2021
I've talked about this before, but mid-Summer 50% off perennial sales are my love language.  That kind of sale typically happens at the big box stores garden centers, but it seems random based on the department manager.  Even at Home Depot - which we have three that I shop from regularly and a fourth that I pop into when I'm going to my parents - I've noticed that some stores do sales differently.  I'm talking hand-written signs vs the normal printed signs that you normally see.
When I come across a hand-written sale sign, I glom on to the stuff.
But, I also was turned on to a whole new thing recently:  Lowes.  We don't have a Lowes close to us, but I took the kids to a batting cage in a town a few over on a recent weekend and discovered that the cages/mini golf place is right behind a huge Lowes.  So, I went in, of course.  And I was surprised.  A step up from Menards, for sure.  The plant material was (mostly) taken care of and not all dried out.  They had a good variety and I'd say they're on par with most Home Depot garden centers.
But the prices?  They started out good, but then there were a ton of hand-written signs.  (These at Lowes were at least laminated.) 3 for 1 perennials.  Don't mind if I do.
I found some small Heucheras that looked interesting:  they were a blend of purple and green and seemed happy.  3 for $4.50 - or $1.50 a piece and they were mine.
They're called Palace Purple Coral Bells (not...Purple Palace) and you can get a sense for them in the photos below: 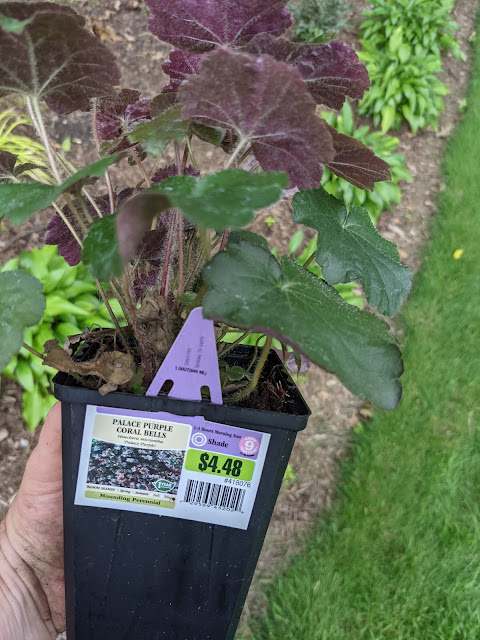 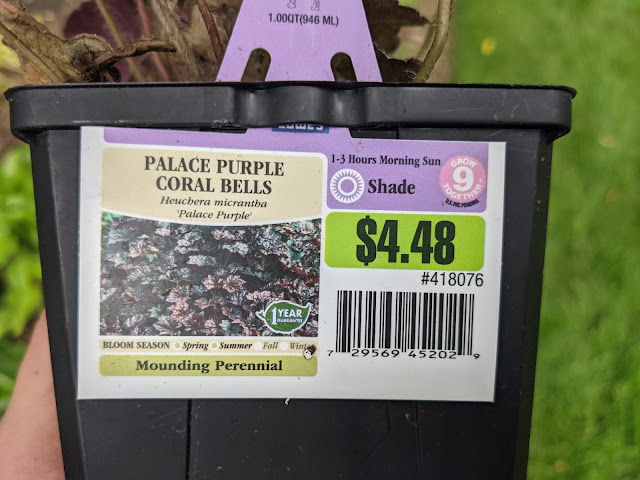 They seem to be one of the original coral bells cultivars on the market as this listing describes them as helping to start a 'craze'. I'm not sure what that craze exactly is?  Heuchera craze?  From American Meadows:

The brilliant hue of Palace Purple is a now famous Heuchera, this variety of Coral Bells provides both beautiful foliage and flowers. To 18" tall. Perennial Plant Association Plant of the Year 1991. (Heuchera micrantha)

Palace Purple is one of the Coral Bells that started the current craze. Hybridized from a naturally purple-leaved native species, bloom is pink and quite dramatic against the dark leaves.

I decided to plant them in the border with the Dolche Apple Twist Heucheras that I planted this Spring.  Those are a bright, chartreuse green, so I tucked these purple ones in between them on the border (and staggered them slightly in front of the Dolche Apple Twist).   Here, below, is one of these new Palace Purple Heucheras in between a Dolce Cherry Twist and an Autumn Fern (Dryopteris erythrosora 'Brilliance') that I planted this year, too.  There's a couple of hostas in the back of the photo, too.  The ferns are doing quite well for being their first year.  They seem to be happy in this spot and are putting on a two-toned show. 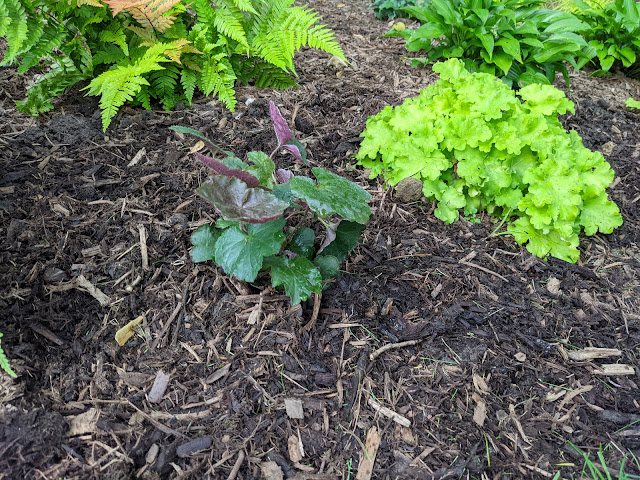 Widening out a bit, here below, you can see more of this area that is totally new in the past 9 months.  It includes sedges, (3 kinds of) hostas, (3 kinds of) ferns, (2 kinds of )heucheras, a snakeroot and a Japanese Maple. 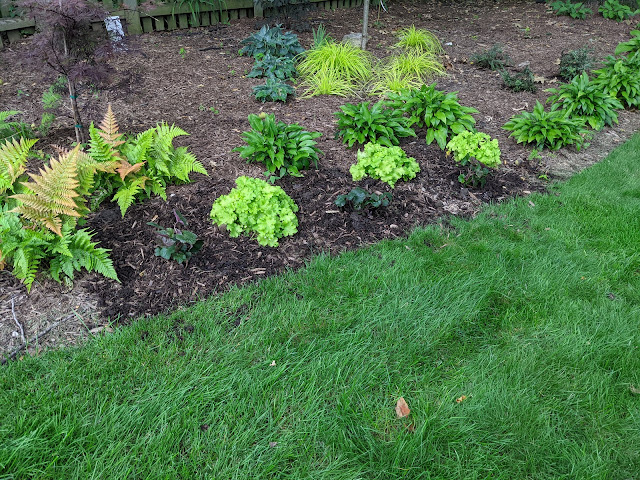 Here (below) is an annotated version of that same photo showing the locations of everything: 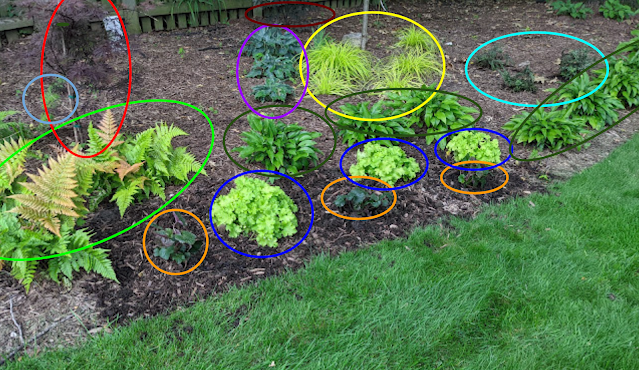 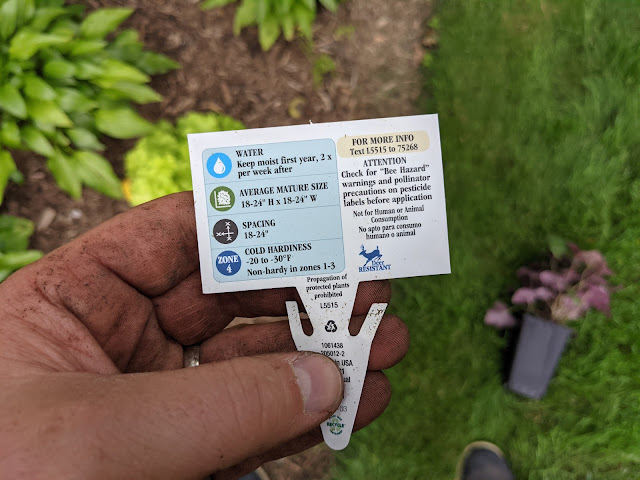 The tag that you see above has a note about the first growing season:  Keep moist for first year, 2x per week after.  Will try to make that happen, but with August coming, it is going to be difficult.
backyard Coral Bells ferns garden diary Heucheras Japanese Gardening Lowes perennials purple leaves woodland gardening
Location: Downers Grove, IL, USA