We have a pair of hydrangeas that are what I'd consider somewhat exotic.  I say that because they're not something you'd come across at your normal Big Box nursery - like Limelights or what-have-you.  These were given to us by Nat's Mom as an anniversary gift back in 2017 - our first late Summer/early Fall in our house.  The two of them are a Tuff Stuff Mountain Hydrangea.  And an Everlasting Revolution Hydrangea.

They were both planted in 2017.  And I've posted about them over the years - where they've grown a bit, have survived, but NEVER produced any flowers.  I recently transplanted the smaller one - Everlasting Revolution - to be closer to the front of the bed due to its small size.

Everlasting Revolution Hydrangea - Has always been smaller.  Supposed to be multi-colored.  Has never flowered.

As for how they look right now - in their end of their fourth growing season, you can see the photos below.  First, the smaller (and recently transplanted) Everlasting Revolution hydrangea.  It is a lovely green plant that is small and ball-like.  This plant appears quite happy - and hasn't grown very large.  And...again...produced ZERO flowers. 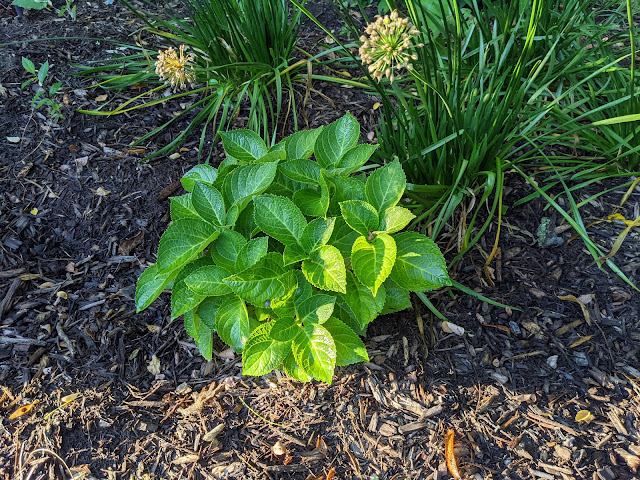 Below, is the other "exotic" - the Tuff Stuff Red Hydrangea.  This one is planted in the original location - a bit closer to the fence and has certainly put on some mass this season.  It, too, hasn't flowered at during the entire existence in my garden.   I'm very hopeful that this particular hydrangea will (eventually) produce due to seeing it in a garden at the Morton Arboretum this Summer where they were in full bloom. 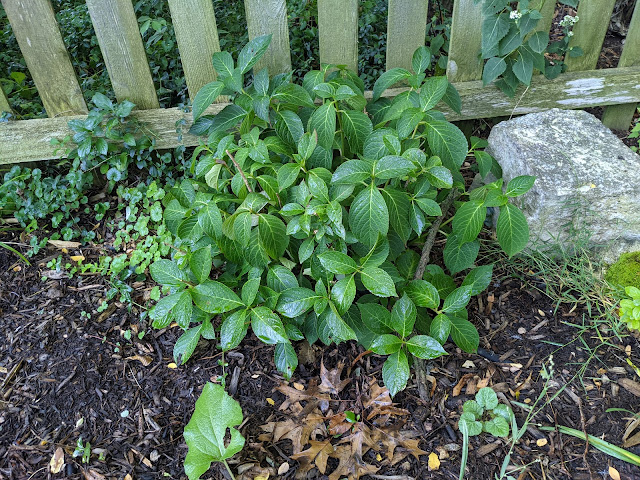