Posted by Jake Parrillo on May 28, 2022
Last Spring, I planted a bunch of bare root hostas in a few spots around our backyard that Nat brought home from Costco.  I'll get to the Frances Williams Hostas in another post, but this one is about the Bressingham Blue bare root hostas from Longfield Gardens.
I planted eight in what - at that time - I called the 'focal curve'.  And six back by the Yew Hedge. Two by the downspout around the Screened Porch.   That's only 16, so I'm not sure if I planted 18 of them (sometimes...these bare root hostas are so tiny that I plant two in one spot).
I covered some of these last year showing their first year growth.  By June, I was seeing some of them emerge from the mulch.  And by August, it looked like seven of the eight in the focal curve had made it.  I don't seem to have documented in the [garden diary] the ones back by the Yews, nor the ones by the downspout.
So...one year after planting bare root hostas, how are we doing?  First, it seems the two by the downspout are gone.  That area eroded a lot, and I think the hostas didn't make it.
But, back in the curve?  See below for seven Bressingham Blue hostas that have come back for their second growing season.  The two on the far right are - by far - the largest - and they seem to get smaller as you move right to left.  But...the important part here:  I planted eight.  And there are - one year later - seven hostas.  Pretty good.  Front row has five, back row has two. 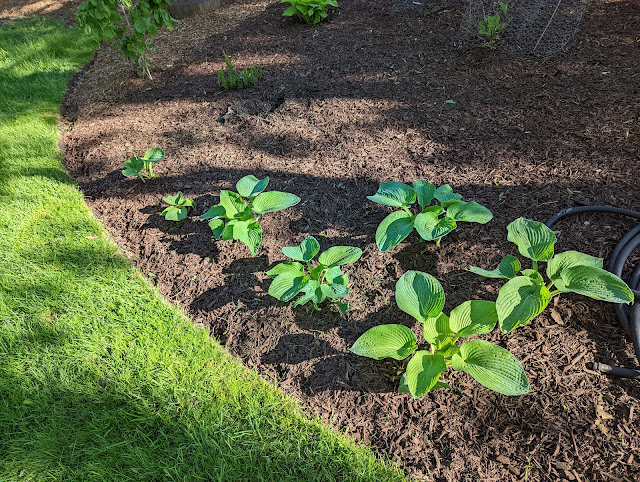 Back by the Hicks Yew hedge, we didn't do as well.  I planted six back here and what do we have now?  Three.  See below.  These are right in the path of trampling by the kids, so I'm happy that three made it. 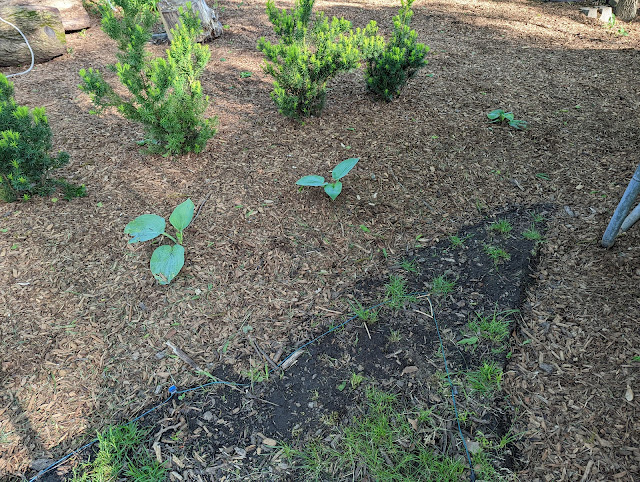 All-in, I started with 18 bare root hostas.  And I now have ten growing in their second growing season. 55% success rate.  When looking at the ROI of bare root hostas like this, I think it is important to look at both size and price.
A 1# hosta right now is about $10 each.  If I bought 18 of them last year, that'd be $180.  The packs of bare root hostas were $20 a piece, so $40 total.  $2.22 per plant.
With ten surviving, that math changes:  $40 total for 10 plants.  $4 a piece.  Still about half the price of nursery grown hostas.  As for their size....I'd say that I have some that are smaller than the $10 versions and some that are larger.   Good value overall it seems.
I'll document the other batch and we can look at the combined ROI for a full picture.
bare root bressingham blue hostas focal point garden diary hicks yews hosta diary Hostas longfield gardens shade gardening shade gardens
Location: Downers Grove, IL, USA