Our plan for the year called for a focus on shrubs.  Shrubs in the backyard, mostly.  But, also shrubs in the front yard.  In my post outlining the list of shrubs that are called for in the plan, I mentioned needing to replace one of the Vanilla Strawberry Hydrangeas that are sitting in front of our front porch out front.  It started to decline last year and despite watering, it withered and died last Summer.  A couple of factors came in play (I'm pretty sure) that caused the hydrangea to die:  the surface root mat from the Norway Maple tree outcompeting the hydrangea COUPLED with the hydrophobic mulch that was taking place and not allowing the watering that I *was* providing to get down to the rootball.

I found four treeform Viburnum - Doublefile - at Menards and brought them home with the goal of adding them to our yard - mostly in the backyard.  Our plan called for eight additional Viburnum (Arrowwood Chicago Lustre) around the border of our yard that would complement the two we planted last Fall.  Because of the Lilac transplant project, I thought that I could get away with a few less (I put four Lilacs in place), and there just so happened to be four of these Doublefile Viburnum.

I ended up planting two of them along the north side fenceline - where the plan called for them to be placed.  And, the third - which I haven't posted about - went in back by the firepit.  And that left me with one to plant.  I *could* have put it in back - where the plan calls for more Viburnum - but, I thought that it would work well out front of our front porch - as a Vanilla Strawberry Hydrangea replacement.

With the two largest Vanilla Strawberry Hydrangeas on the RIGHT side of the bed, it felt like the slot where the dead one was planted would provide a nice off-center opportunity to add some height to the bed.  Here's how it looks now after planting: 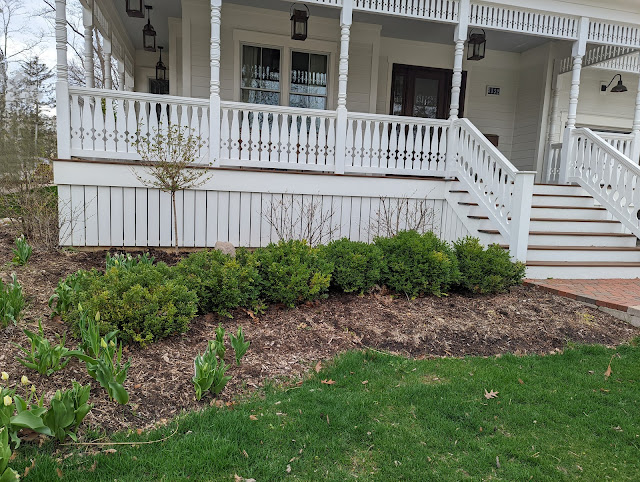 Here, below, is an annotated version of that same photo.  Blue circles = Vanilla Strawberry Hydrangeas.  Green oval = Limelight Hydrangeas around the side of the porch.  Orange oval = the new Doublefile Viburnum var. tomentosum Treeform. 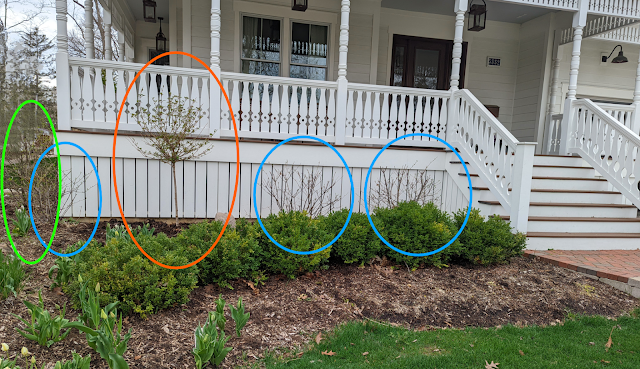 The Doublefile Viburnum is a 'tiered, horizontal-branching' flowering shrub that is, by itself, a 'layered' look in the landscape.  I'd love to see this shrub to mature to fill in the space from *behind* the Norway Maple trunk all the way over to the healthy hydrangeas while growing up to have tips that grow taller than the porch railing.
#19 on my 2022 to-do list was to 'improve the front porch bed' - which meant the soil, but I think adding this treeform shrub *does* count towards the overall goal.  I'm taking (partial) credit.
Watering and continuing to ensure we don't end up with even MORE hydrophobic mulch feels like a big key towards getting this shrub to get established this Summer.
2022 to-do list doublefile viburnum flowering shrubs front porch beds front yard landscaping front yard shrubs hydrangeas layering shrubs treeform vanilla strawberry hydrangea viburnum
Location: Downers Grove, IL, USA