Over the past few weeks, I've posted a couple of times about how I went about digging up, dividing and transplanting various mature perennials like hostas, ferns and even alliums.  At last count, I had created 32 new, 'free' plants this Fall through divisions.  #12 on my 2022 to-do list was to focus on adding plants through division.  I'd say that 32 count as completing the task.  But, there's another item on that same to-do list that I wanted to cover:  #4.  Enhance the In Between Two Driveways Strip.  The intersection of plant division and IB2DWs is how I went about trying to check both boxes.

Over the past few seasons, I've focused my Fall dividing on the various Karl Foerster Feather Reed Grasses around the front and backyard.  A few larger ones suffered from 'center rot' and NEEDED dividing, while others were just simply large enough to divide into new plants.

That's the plant - Karl Foerster Feather Reed Grass - that I divided and planted to further 'enhance' the IB2DWs strip.  I had a row of six of these grasses already on the border of our property IB2DWs - one of which was (now) being covered by the canopy of the Bald Cypress.  I dug that one up and divided it into three new clumps.  I also grabbed another small one and moved it out.

Below, you can see the location of these four new grasses IB2DWs.   They're running from the Bald Cypress on the left to the Ginko tree on the right. 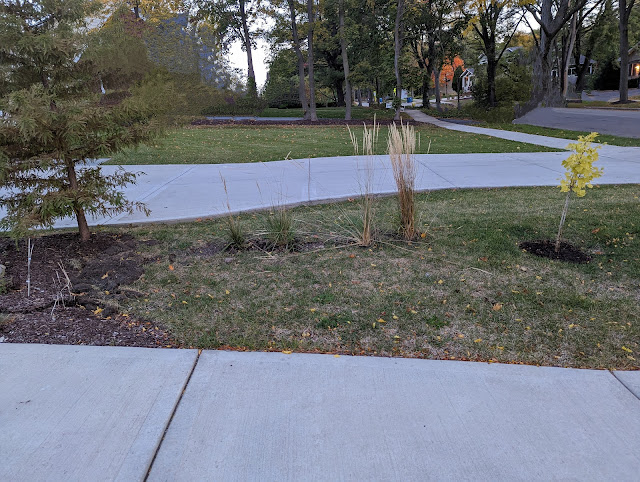 This gets me up to 36 new, 'free' plants for the season.  And, four new plants IB2DWs.  Coupled with the trio of Nepeta and Blue Fescue grasses, this makes 10 new plants IB2DWs - addressing #4 on the the 2022 to-do list.
What is left next year?  Sheet mulching with cardboard around these grasses, extending the bed down to the Ginko.  And...I'm thinking:  plant some Disneyland Roses up there.
2022 to-do list disneyland roses dividing grasses fall dividing front yard front yard landscaping ginko tree ib2dw karl foerster narrow strip ornamental grasses
Location: Downers Grove, IL, USA