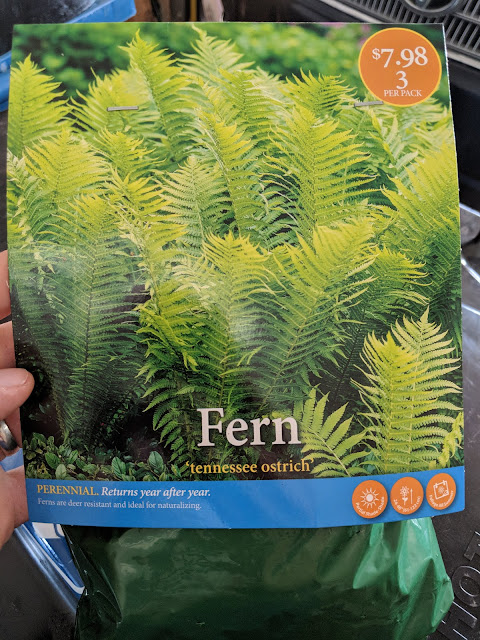 My love of shade gardening is well documented here on the blog.  After all, it is what I grew up with and what my Mom was doing down on Overlook Court East.  We had a wooded lot and she cultivated - as best she could - shade gardens featuring hostas mostly.  At our new spot in Downers Grove, we too, have plenty of shade.  We were blessed with a few volunteer ferns that came with our lot and I've begun to incorporate hostas into the mix that I both have bought (this year) and scavenged from a tear down (last fall).

In addition to my love of hostas, I've posted quite a bit about one of my other favorites:  ferns.  We've fostered some ferns in Naperville (which I need to dig out!), planted some ferns at Equation Boy/Man's and Vic's house before we moved out, transplanted some survivor/volunteers in our #newoldbackyard, confirmed with the University of Illinois Extension Office that we do, indeed, have Ostrich ferns, and documented them coming up over the years at our first house.

And now, as you can tell from this post, I've made another move with ferns:  bought a package of three Tennessee Ostrich bulbs/tubers/root systems.  I'm not sure what to call them, but here's what they looked like once I opened the package (below).  They have established root systems and a few of them had these little fiddle heads curling upwards. 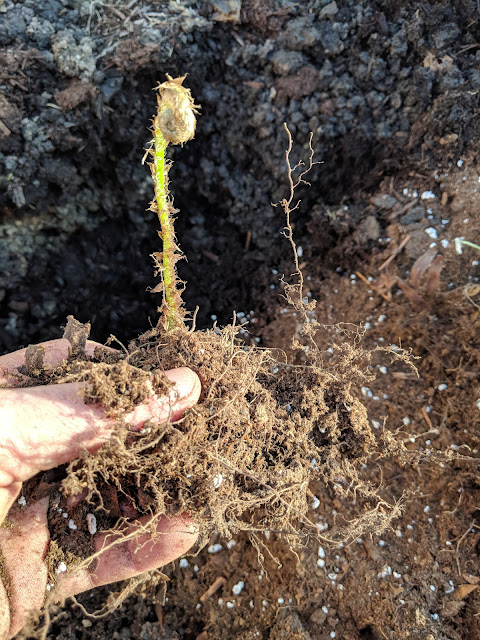 On the northside of our garage, we have a fairly neglected part of our landscape.  Welp...there's tons of our landscape that is fairly neglected right now, but this part has a linear bed established by the landscapers/builders that follows the foundation and runs from front to back.  I chose the portion from the fence/gate backwards to the side-entry door of the garage to plant these three ferns.  My foundation beds were mulched last year before we moved in and there was *some* topsoil put down, but below about 5-6 inches is clay.  Like...stick to your shovel, hard-digging, roots won't grow clay.  So, as part of this planting of ferns - but I also did this in MOST of the rest of the foundation beds - I took my spade and a pitchfork and tried to get some organic material down in the clay levels in an attempt to improve the deeper soil quality over time.

First, I moved the top layer of mulch to the backs of the beds.  Then, dug with the spade to turn over some of the top soil and the top of the clay layer.  I got some of the clay out of a trench/holes and set it aside.  Then, I added some new, additional organic material (I used a combination of mushroom compost, peat moss and perlite) back on top of the newly dug out clay.  Then, using a pitchfork and spade shovel, attempted to disturb the clay layer/mix in that new organic material.

Once that was done, I took the pushed-aside mulch layer, added it to the clay/not-so-great dirt that I pulled out of the beds and mixed them together.  And re-applied that on top.  Now, my mulch layer was disturbed and there are lots of sections that have dirt and clay clumps on top.

But that's ok, because my new mulch layer is coming in the next 10 days.  So, we'll be adding more organic material to the top and won't have any clay/mud poking through.

The way I'm looking at this is that I have a multi-year project going on here to improve the soil quality in my beds.  I'm not going to have black gold in year one.  But, I'm hoping that if I continue to turn over the beds and amend them each year with additional organic material, coupled with applying a nice fine mulch on top each Spring, over time, the clay will begin to break down and as I continue to plant and tend to the beds, it will improve.

A big piece of the puzzle is getting our soil tested and that's something that I'm going to do this summer.  The University of Illinois Extension Office lists a series of vendors that will do the soil testing for me.  That list can be found here.  For $30, we can know what we need to do with our soil.

But, now back to the ferns.  After I turned over the beds, I also planted these three ferns in a row along the garage.  The north side of the house provides quite a bit of shade, so these ferns should do well here.  Here's the area where I put them and I'm posting this photo so I can reference it when they come up both later this Spring and over the next few years. 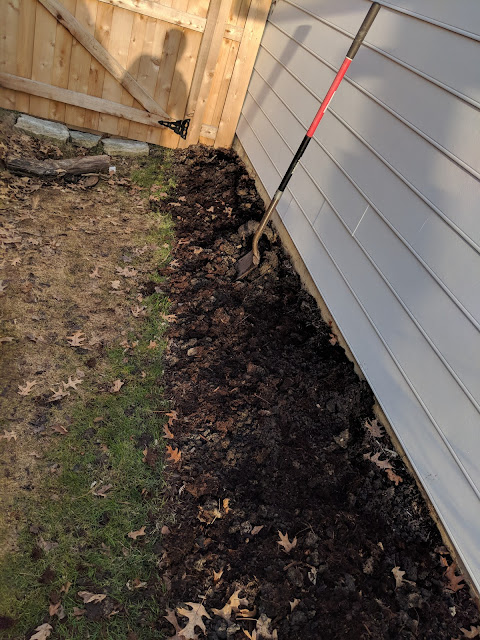 This area will, over time, transform as we're planning a paver walkway to the left of these beds that will take visitors from our driveway back to the patio.  You can see the worn-down area that I've been walking on all Winter and Spring has taken a beating.  Right now there aren't even stepping stones, so that might be a quick fix I make this Spring before we take on the larger paver project.