Google+ - The Emerald Sea Where My Past And Future Collided 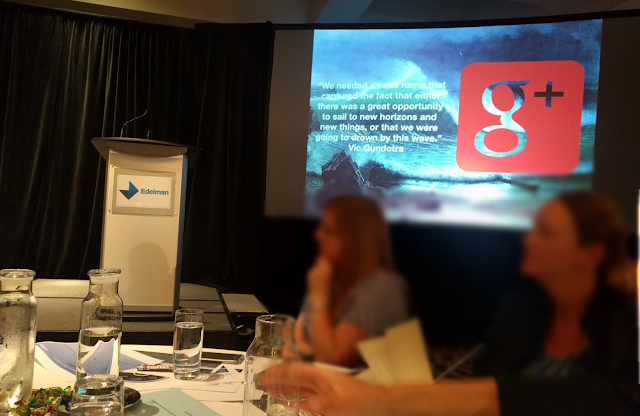 I was sitting in these internal meetings for Edelman in Toronto a few weeks back and my past hit me square between the eyes.  One of the speakers was Joshua Gans, a professor at the Rotman School of Business at the University of Toronto who speaks widely on the concept of disruption.  It was an appropriate topic for us at Edelman because our agency is undergoing a transformation of sorts as we head away from pure Public Relations to becoming a Communications Marketing organization.    He runs a blog called Digitopoly and covers disruption and economics.

Welp, during his talk, he cited a few examples of organizations that made moves based on the marketplace and talked about their being three factors in disruption:

1.  First...can you guys see the disruption coming?
2.  Can you identify and organize a response?  And...
3.  Can you execute on the response and adopt it to your organization.

He also talked about the three type of responses:

As he walked through some of his examples of organizations, one of the ones he put up was this slide above that shows the Google+ logo and the concept of the Emerald Sea.  He explained to the group that the Emerald Sea was the internal code name for Google+ and the effort to stitch a social spine on all of Google's products.   There's been tons of keyboards clacked away on the outcomes and lack-there-of as it relates to Google's foray into social with Google+ and Gans states that he thinks Google was able to identify a potential disruption and even organize and execute a response.  But, he (and a lot of other people) call Google+ a failure.  And, he stated that he thinks that a 'wait them out' strategy would have behooved Google because he argued that search and social aren't linked today and there doesn't appear to be appetite to link them in some meaningful way.

What's interesting, is that I was at the eye of that storm and - amongst my peers at Edelman - had probably the most unique reaction to Gans reference to the Emerald Sea.  I was on the Global Communications and Public Affairs team when G+ was in dogfood and eventually turned loose on the world.  I saw first hand how the product worked and didn't work.  In fact, I still use the stream to share photos and stories with my family and we're huge users of some of the products that have rolled out of the Google+ world like Google Photos and Hangouts.

But, more importantly, I'd argue that Professor Gans and others who point to this being a failure miss a great deal of the positive outcomes that came from it:  just about EVERYBODY today is signed in to Google when they do a search.  More and more, that happens on mobile devices, so Google *might* have gotten this account-centric view of the search world anyway, but Google+ started us users down that path.  Before Google+, plenty of people used Google without signing in and the SERPs weren't able to be 'right' for them.  Today?  They're personalized and give us all the best answers as fast as we can imagine.  Besides...competition is only a click away, right?  So, that means that the smarties at Google are ALWAYS on the stick, making search better, more useful and faster.  I can't wait for the Google Assistant to take a prime spot in our new kitchen.