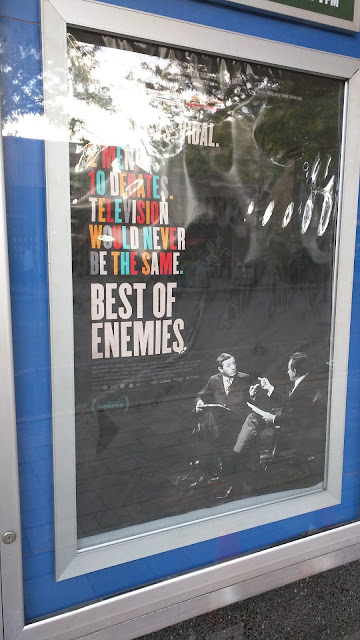 Continuing in the series of Art @ the York film series, the upcoming October run is Best of Enemies.  Here are the posts covering the inaugural July as well as the August and September versions.

I took that photo in the morning on my walk to work. With the early fall days starting later, I'm getting A LOT of glare off the posters right now!

Best of Enemies is a documentary covering a couple of 'public intellectuals'.  From the Classic Cinemas site:


'Best of Enemies' is a documentary about the legendary series of nationally televised debates in 1968 between two great public intellectuals, the liberal Gore Vidal and the conservative William F. Buckley Jr. Intended as commentary on the issues of their day, these vitriolic and explosive encounters came to define the modern era of public discourse in the media, marking the big bang moment of our contemporary media landscape when spectacle trumped content and argument replaced substance. Best of Enemies delves into the entangled biographies of these two great thinkers and luxuriates in the language and the theater of their debates, begging the question, 'What has television done to the way we discuss politics in our democracy today?'

Get out and support the York Theatre and support art in the community.  We're pretty fortunate to have the gem that is the York in our City Centre and good on them for promoting this kind of feature for the residents of Elmhurst.
2015 resolution art @ York downtown elmhurst elmhurst city center Elmhurst City Centre everygoddamdamnday movies york theatre