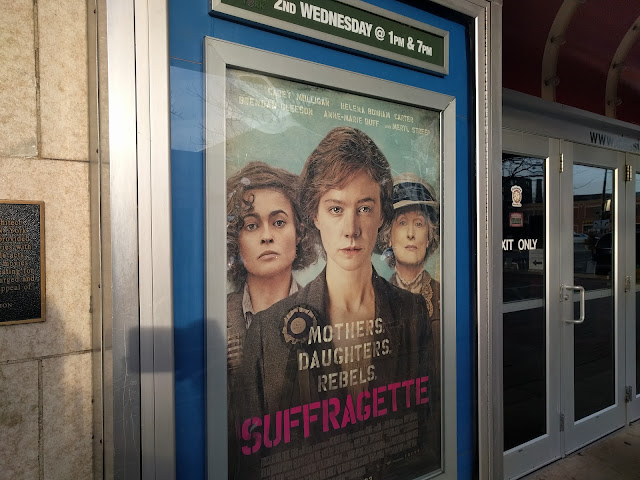 This month, it was Trumbo starring Bryan Cranston for the Art @ the York Theatre showing.  But, if you walk past the Theatre today, you'll see that they're already advertising for the April showing which will be the film Suffragette.

Suffragette will show on the 2nd Wednesday of April:  April 13th at 1 and 7 pm.  Make sure you get there early for the organ music.  Seriously.

I'll tell you that while I had heard of Trumbo before the Art @ York showing, I've never heard a peep about Suffragette.  From the York Theatre's site:


This stirring story centers on Maud, a working wife and mother whose life is forever changed when she is secretly recruited to join the U.K.'s growing suffragette movement. Galvanized by the outlaw fugitive Emmeline Pankhurst, Maud becomes an activist for the cause alongside women from all walks of life. When increasingly aggressive police action forces Maud and her dedicated fellow suffragettes underground, they engage in a dangerous game of cat-and-mouse with the authorities, who are shocked as the women's civil disobedience escalates and sparks debate across the nation.

Here's the whole series of Art @ the York Theatre posts from the series.