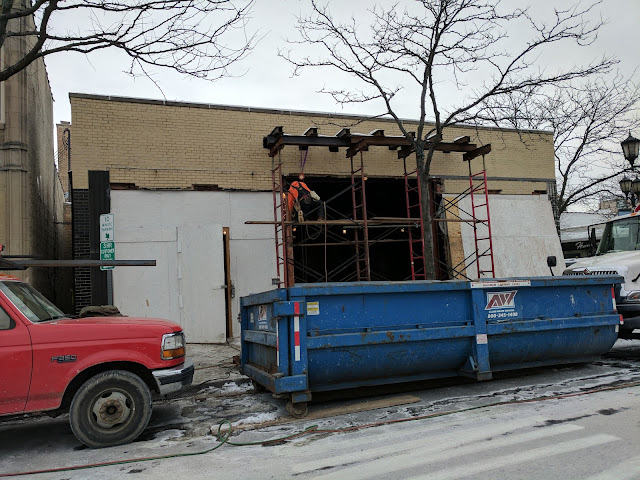 It has been eight months since the storefronts down at the corner of First and York have sat gutted and boarded up.  I last posted about them here on the blog back in March.  And that's when the rumor mill was saying that it might end up being a Rosebud restaurant going in there.  But, I have no idea if that was real or just idle chatter.

Whomever is moving in, there's suddenly progress going on with the building.  In that photo above, you can see a crew working on the exterior installing steel beams that look like they'll be creating an awning/little roof of sorts that sticks out from the brick facade.  Anyone know what's going in this spot?  A guy can keep hoping for retail, right?

Update:  Alderman Dannee Polomsky of the 3rd Ward pointed out to me this am via email that this location is for a new craft beer place run by 'Beer Pros' called Beerhead Bar and Eatery.  From the City of Elmhurst's site:


The City is excited to announce that Beerhead Bar & Eatery has chosen Elmhurst as the home for their seventh location, opening later this year at 100 N. York St. The first store (branded under “The Beer Market” trade name) opened in May, 2012 in Vernon Hills, Illinois. The concept offers approximately 500 brands of beer at any given time, live music, and “community” seating, all wrapped within a warm, entertaining environment. Since the opening of the Vernon Hills store, the Beerhead team has sought to expand their presence in other markets with a keen eye on creating a local environment closely tied to the surrounding communities, breweries, distilleries, and markets.Their menu offers a variety of food offerings to complement their expansive selection of beer, wines, and specialty cocktails. From tasty personal pizzas, hearty sandwiches, to their signature shareable Barbarian Pretzel, fresh salads, and memorable desserts, Beerhead celebrates the concept of simple pleasures - "simple, yet just right."