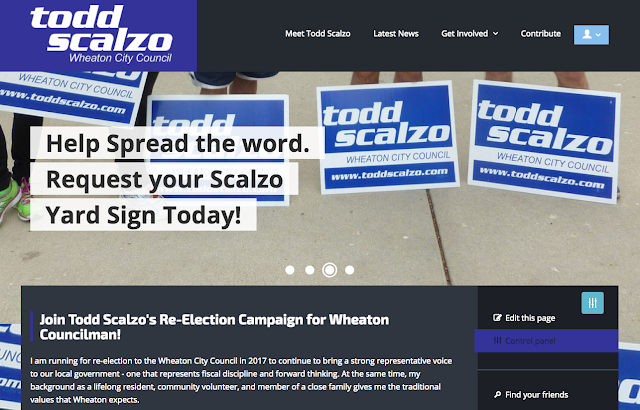 A good friend of ours is running for re-election as the West District Councilman in Wheaton, Illinois.  His name is Todd Scalzo and you can find out more about him and his campaign here on his site.

Todd was first elected back in 2009 and has served the West District in Wheaton well over the past 8 years.  He's been endorsed by a strong and diverse set of stakeholders in Wheaton including the Wheaton Mayor Mike Gresk, many of his fellow Councilman and even members of the local school board.  You can review the full list of endorsements for Todd Scalzo here.

I first met Todd Scalzo back in the Spring of 1997 and have gotten to know him well over the past 20 years.  (Yikes!  I just realized that I have known Todd for more than half of my life!)  Some of you know that I too, spent time serving my local government as both a Village of Frankfort Trustee and as a Commissioner on the Frankfort Park District Board of Commissioners.  I know what it takes to make a difference on your hometown and I know the dedication and commitment that Todd has put in for Wheaton.

Todd is a Benet graduate and that gives him loads of extra credit from Nat!

There isn't a better man for the job and I'm asking you to support Todd Scalzo for re-election in Wheaton.  If you live in town, you can request a yard sign here on Todd's re-election website.
fraternity brothers local government politics todd scalzo wheaton