Some of the best fireworks at Walt Disney World are clearly New Year's Eve.  And we've seen those from our room at the Polynesian Village Resort.  I posted about that experience here and here.  That show has ruined me for just about any other fireworks show.   The second best?  Might be Hallowishes that they put on during Mickey's Not So Scary Halloween Party.   We went to the party one night, but we also were staying at the Grand Floridian during another night that they hosted the party and we did not attend.  We did, however, head down to the pier to catch the show from near the water and it was pretty great.  Perimeter fireworks were still great - not quite as great as being dead-on from the Polynesian - and light up the waterfront.

There was a small crowd down on the end of the pier, but we stayed next to Narcoossee's and were able to enjoy them all by ourselves.

We've experienced the various fireworks shows from Bay Lake Tower, but I don't seem to have posted photos of that here on the blog.  I'll go back and try to find some photos and complete the circuit of the 3 monorail resorts and the fireworks show viewings. 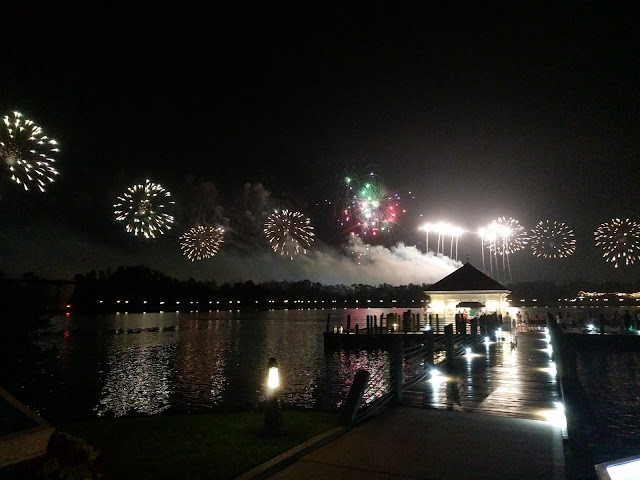