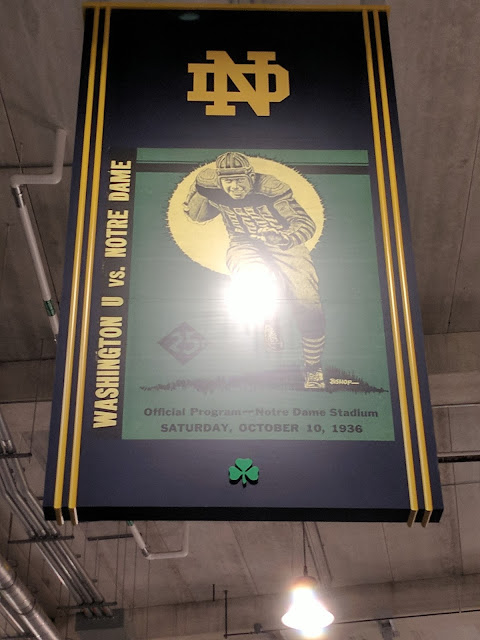 A few days back, I mentioned that we had attended a game at Notre Dame Stadium and while there were a lot of 'special touches' at the Stadium/game, one that stood out was that they gave away half dollar coins from the concession stands.  Well...the game turned into a bit of a blowout, so late in the 3rd quarter, I took a walk around the bowels of the stadium.  I wanted to see all the light fixtures, reused sections of bleachers, how the old/new stadium fit together and various other things that adorn the interior of the stadium.

One of the things that they've done to represent some of their strong history is to blow up and and install vintage program covers from games of past around the concourse.  And guess what?  One of those football game programs was from a game between Washington University and the Fighting Irish.  Yeah...Wash U.

That's Nat's alma mater.  And now a Division III football program that I affectionately call the "Teddy Bears".  Nat insists that they're just the "Bears", but I'm not so sure.   But...at one point, they were a regional university in the Midwest who came to South Bend to take on the Irish.  And they were proud members of the Missouri Valley Conference - which is the 2nd oldest college athletic conference in the country (2nd oldest to the B1G, naturally!).  Pretty neat.  The Teddy Bears lost to the Irish that day, but check out the rest of the schedule that ND played in 1936:  Wisconsin, Pitt, Ohio State, Navy, Army, Northwestern and USC.  Add Wash U and Carnegie Tech (now Carnegie Mellon) to round out the schedule.   Looking at the Wikipedia post on the team, it seems that Carnegie Tech was ranked as high as #6 in the country in 1938, so I suspect the team was pretty good in 1936, right?

Once we spotted it, Nat *had* to pose with the program, right? 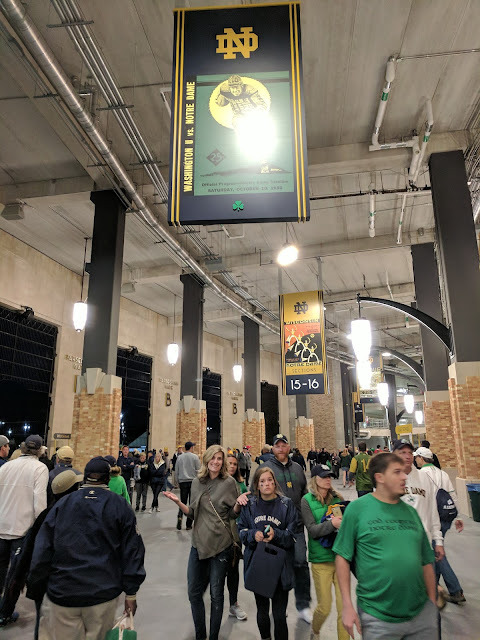 I've written about Wash U a few times here on the blog.  Most recently, back in 2013 when I caught Howard Stern talking about the school (his daughter graduated from there) and then in 2010 when we spent time at Blueberry Hill near Wash U where they have these beautiful Schlitz Beer wall lamps.
college football football natalie notre dame south bend wash U Washington University
Location: Moose Krause Cir, Notre Dame, IN 46556, USA