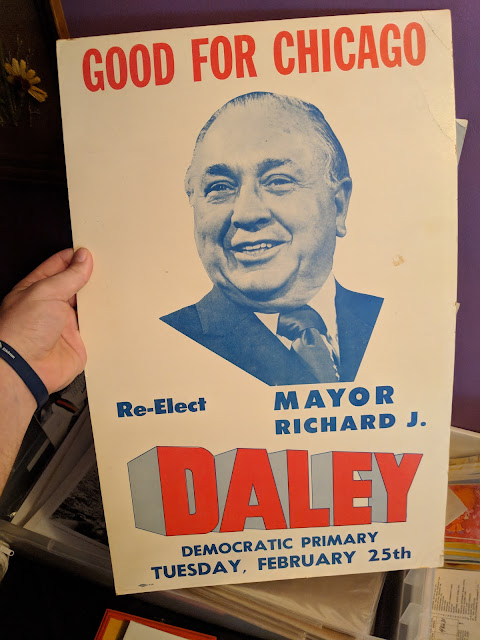 Yesterday, I posted a photo of the telephone desk that "got away" from an Estate Sale in Twin Lakes, Wisconsin and mentioned that there were a few other items that I came across that I had to resist a pretty strong urge to buy.  The first one of these items that got away (hence the OTGA mention in the post title) is this "Good for Chicago" re-elect Mayor Richard J. Daley primary poster.

Based on this story, this appears to be from Da Mare's 1975 primary where he trounced a 34-year-old Alderman named William Singer, a prosecutor named Edward Hanrahan and a black State Senator named Richard newhouse.

There was a smattering of political memorabilia at the Estate Sale with most of it being from Chicago politics, so I'm assuming that the family moved from Chicago at some point to the lake house in Twin Lakes.

Remember:  It is enough to enjoy the existence of things without possessing all of them.
chicago politics da mare estate sale estate sale finds mayor daley one that got away political posters