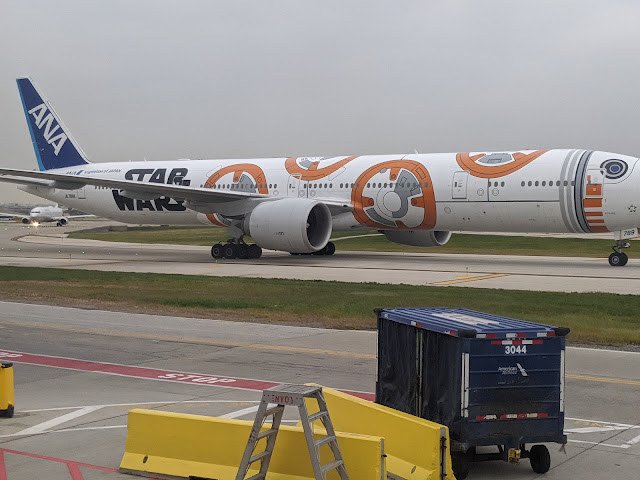 I was sitting at the gate in my American Airlines plane waiting to back away when this ANA plane taxi'ed by our gate.  ANA is a Japanese carrier that is doing a "Star Wars Project" as they call it.  I've flown a few times to Japan (Narita), but I've only flown either United or JAL.  This BB-8 livery is one of three in the Star Wars fleet:  they also have a R2-D2 and C-3PO versions.

If you're interested in seeing it, the fine folks at Flight Radar 24 have provided this tracking link:  Follow the BB-8 777-300ER with registration JA789A.

Check out the release on the ANA Star Wars site here for full details including the cabin details that match the livery: 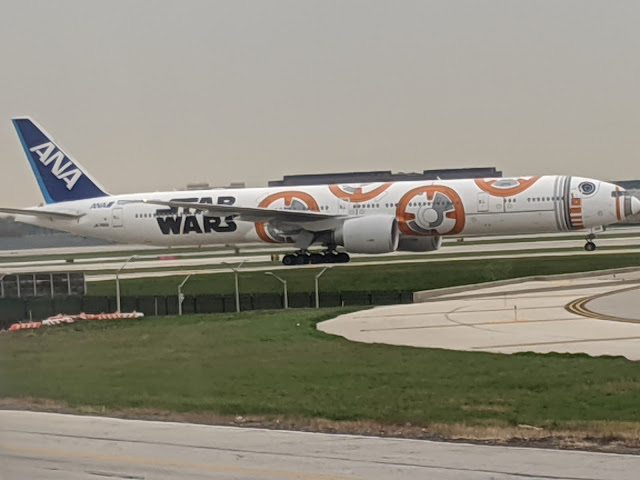 This isn't the only - or first - Disney airplane livery design.  Recently, Alaska Airlines teamed up with Disney for a new Pixar Pier livery that includes Woody, Buzz and Jessie along with the sign from the Pier at Disney's California Adventure.  The Points Guy has a round-up of other Disney liveries including another one from Alaska Airlines featuring The Incredibles.  WestJet has a Frozen livery with Anna and Elsa and Olaf on a beach.

And Disney is also spreading the Star Wars plane livery love around with this cool Millenium Falcon livery on Virgin Airlines that features Galaxy's Edge.  So, too, does LATAM Airlines have a Galaxy's Edge livery, but with a Stormtrooper instead of the Falcon.
Airplane cabin airplanes ANA disney japan Japanese Airlines livery O'hare star wars
Location: Terminal 3, Chicago, IL 60666, USA