One of the pins in the stash that I posted about yesterday from what seems to be a couple of Disney Parks trip in 2015 and 2016 is this Christmas pin you see below.  It is marked "Mickey's Very Merry Christmas Party 2015" as well as "Limited Edition".  It features Captain Hook and his guy Smee and has a ribbon bow affixed to the front of the trading pin: 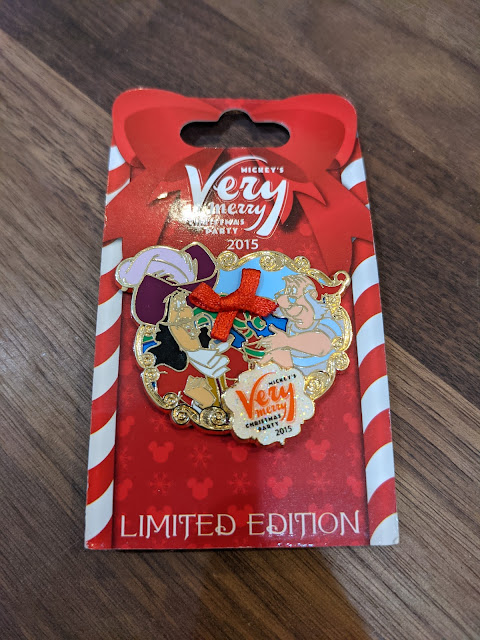 Looking through the archives, it seems that I documented a few of these back in the day - including these two companion pins from the very same 2015 Mickey's Very Merry Christmas Party at the Magic Kingdom and these Haunted Mansion one from the same series, too.

Back at the end of June, I added a coaster (and glass cover) to the #CoasterCollection here on the blog and kind of just glossed over the actual hotel.  Being a fan of old-school hotels, the lobby at the Roosevelt deserves a post of it's own here in my online/travel diary.  Check out the photo above to see the mosiacs, the fixtures and the all around glamour of the place.  They don't build hotels like this any more - in terms of the materials but also the space.  There is so much 'useless' space that isn't in rooms.  The areas around the elevators on the upper floors is generous.  Today? They'd build that space into the rooms.  There are these little weird half-floors that are totally NOT ADA-compliant.   And in keeping with the Waldorf-Atoria tradition of featuring significant clocks in their lobby , the Roosevelt has a beautiful piece called "The Paris Exhibition Clock.  Turns out, despite the clock being made in 1867, it has only called the Roose
Read more