Once I knew the large Norway Maple needed to come down, I immediately switched into tree planting-planning mode.  I looked around-and-around and thought about what we wanted in a tree:

4.  Something 'stately' and (when mature) large

I worked with a few people to sort options.  The temptation of the Fall-Colors of the various Maple trees was strong.  But, ultimately, the experts that I consulted said that Maples make up far too-much of our local, urban canopy and that I should plant something different.

Established in 1986, Chicagoland Grows® Plant Introduction Program is a unique partnership among the Chicago Botanic Garden, The Morton Arboretum, and the Ornamental Growers Association of Northern Illinois (OGA), dedicated to developing, selecting, testing, and marketing a diversity of plants from landscape trees to shrubs, perennials, and grasses, all well adapted to midwestern and equivalent landscapes.

That means that the experts from the Botanic Garden and the Arboretum worked with the growers to create and cultivate GOOD trees.  The program (currently) features various varieties of trees including Maples, Buckeyes, Elms, Lilacs, Birches and Planetrees.

I narrowed in on a few trees - mostly from the Morton Arboretum - and decided to select the Triumph Elm - or Ulmus 'Morton Glossy'.  Here's the listing that describes the tree thusly:

The Triumph™ elm with its strong, upright branching is easier to train and with its deep green, highly glossy foliage is more attractive as a young tree compared to other elms. The foliage turns yellow in the fall. At a young age, this selection exhibits an upright-oval form becoming more vase-shaped with age. Triumph™ elm has excellent disease resistance, and moderate insect resistance to elm leaf beetle and Japanese beetle. Triumph™ elm was developed through a controlled cross conducted by Dr. George Ware at The Morton Arboretum using Accolade® elm (U. davidiana var. japonica) as the female parent and Vanguard™ elm (U. pumila × davidiana var. japonica) as the male parent.

I picked a 3.5" caliper tree.  And, had it planted in our front yard/front porch beds.  They removed one of my boxwoods.  Here, below, is what the tree looks like on the day it was planted.  It is about 20' tall and has a narrow, upright, vase-like shape. 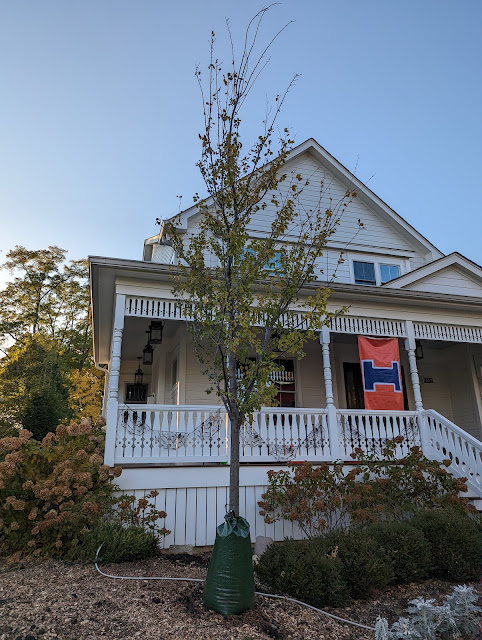 See below for the tags: 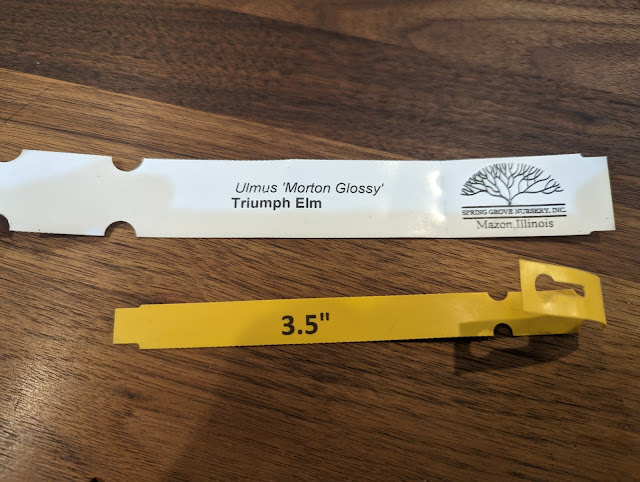 I have high-hopes for this tree - in terms of early (and fast) growth.  Five years from now, I'm hoping that this tree reaches the peak of our house and fills out with a nice canopy.  Maybe that's wishful thinking, right?  But, because of the late-fall planting, I'm thinking the 2023 season will be the 'sleep' year.  With 2024/2025 being the creep/leap.
This Winter, I get to start to think about what belongs at the base of this tree landscape-wise.  Starting with moving some of the Karl Foerster grasses back (I dug them out ahead of the Norway Maple tree removal).
With this planting, I'm *pretty sure* that I've now planted back-to-back the SMALLEST and the LARGEST trees of all the trees we've planted over the years.
This Triumph Elm tree marks the ninth tree that we planted this season.  And the 77th tree (wow...77 trees planted) since 2017.  56 of the 77 are alive.
Six growing seasons:

Here's the full accounting:
2017 (9 planted. 4 Dead. 5 of the original annual total alive now):
1. Flowering Pear in backyard on north side.
2. Flowering Pear in front yard by garage. (LOST and replaced)
3. Japanese flowering cherry
4 and 5: 2 Lindens that I espalier'd and placed by the south fence line near our kitchen windows.
6. A Dawn Redwood from Earth Day 2017 (LOST and replaced)
7. Nat's Saucer Magnolia in our front yard
8. A Corkscrew Willow all the way in the back (LOST)
9. A Crimson King Norway Maple near the trampoline
2018 (17 planted. 6 Dead):
10. Another flowering pear from Earth Day 2018
11. Red Maple Sun Valley tree from Earth Day 2018.
12. Weeping Cedar tree - our first evergreen.  (LOST)
13. The weeping flowering cherry tree that the Babe planted for Earth Day 2018.
14, 15, 16, 17, 18, 19, 20, 21. These Frans Fontaine Hornbeams.
22. A replacement Chanticleer Pear tree (3" caliper) out front by our garage
23. Our second evergreen - a short Fraser Fir Christmas Tree out by the trampoline. (LOST)
24. This Canadian Hemlock that is the first of nine that our landscape plan calls for in the backyard. (LOST)
25. Our replanted/replacement Dawn Redwood. Same spot as the first.
26. This teeny-tiny Bald Cypress that I planted in the front yard, in between our driveway and our neighbor to the north.
2019 (9 planted.  5 Dead):
27, 28, 29.  A set of three small Canadian Hemlock Trees in our far backyard. (Two Lost)
30, 31, 32.  This second set of three small Canadian Hemlocks along the north fence line. (One Lost)
33.  My new Weeping White Spruce that will only grow about 4' wide placed near the fence line alongside the espalier'd Lindens.
34.  A NEW Dwarf Alberta Spruce planted near the south fence line.  Our first "dwarf" tree.
35.  This new Hakuro Nishiki Willow (Dappled Willow) tree planted close to the flowering cherry on the southside.  LOST - October 2020.
2020 (17 planted and 6 Dead):
36.  A small Chanticleer flowering pear on Earth Day 2020 outside our screened porch.
37.  A very thin Lombardy Poplar tree - columnar form - in the way back wood chip area.  LOST - July 2020.
38, 39, 40, 41, 42, 43, 44, 45.  These apple trees in a Belgian Fence espalier.
46.  A small Northern Red Oak tree - our first Oak tree planted.
47.  A 'decapitated' Lavender Twist Weeping Redbud that I planted on a whim.
48.  A replacement (from the nursery) Lavender Twist Redbud planted close to the brother.
49.  A tall(ish) London Plane tree that suffered some transplant and frost shock, but seemed to recover.
50.  Our second contorted tree - this one inspired by Disneyland Paris: a Harry Lauder's Walking Stick tree.
51.  Our third contorted tree - but one that checks A LOT of boxes.  Deciduous conifer.  Weeping.  Contorted.  Japanese.  Planted behind the front Maple - the Horstmann's Recursive Weeping Contorted Larch.  LOST - Aug 2020.
52.  Via the Morton Arboretum Plant Sale - a columnar tree from Japan - the Red Fox Katsura Tree that I planted as an understory tree to the dying Chanticleer Pear Tree next to our driveway.
2021 (16 planted and 16 alive):
53.  A tiny bareroot Shagbark Hickory from the Benet Academy Environmental Club planted in the backyard.
54.  Our first Japanese Maple - a dwarf Tamukeyama Maple planted in the south backyard bed.
55.  A large Weeping Nootka Falsecypress from Wannemaker's planted in the new bed on the northside.
56.  A long-sought-after Emperor I Japanese Maple - our second Japanese Maple - that is now planted on the border near our new-to-be-created fire pit area in the backyard.
57.  A Harvest Gold Hargozam Crabapple tree in our Belgian Fence (replacement)
58.  Another Harvest Gold Hargozam Crabpple tree in the middle of our Belgian Fence.
59.  A dwarf Japanese White Pine - Pinus Parviflora Nana (or perhaps something else)
60. and 61.  A pair of Malus 'Sutyzam' (Sugar Tyme) Crabapple trees on the southside of our house in pre-espalier form.
62.  A tiny, injured (cracked in half) Ginko tree that arrived via online nursery.
63.  A short Chinquapin Oak tree from a fundraiser planted in our backyard.
64.  A second, tiny Ginko tree - this was a replacement for #62 - planted 'ib2dw'.
65.  A small - and ALL Green - Pagoda Dogwood (Cornus alternifolia) planted in front of the back Yews.
66. 67. 68.  A trio of London Planetree 'Bloodgood' trees that are planted along the fence that I'm going to attempt to pleach.
2022 (9 planted and 9 alive):
69. 70. 71. 72. 73. 74. Six Green Giant Thujas trees planted as an upright evergreen layer in the backyard. Thuja standishii plicata.
75. A small Saratoga Ginko tree planted in our front yard by the front walk.
76.  A London Planetree Exclamation planted in our parkway.  A bandit tree of sorts.
77.  The largest tree - 3.5" caliper - we've ever planted. A Triumph Elm - Ulmus 'Morton Glossy' as a replacement for the large Norway Maple tree in our front yard.
2022 to-do list caliper Elm Tree fall planting front porch front yard front yard trees garden diary Morton Arboretum tree diary tree planting Triumph Elm
Location: Downers Grove, IL, USA