One Year Later: Love Smith and My Fighting Illini

Posted by Jake Parrillo on March 07, 2017
One year ago today, I posted this on the blog: What a year it has been for the Illini and Athletic Director Josh Whitman.  Has Lovie lived up to the billing?  As an Alum and former member of the football team I can say this without question:  He has!

Did we win a ton of games last year?  Nope.  Will we win a bunch this year?  Probably not.  But that's ok.  #WeWillWin.  Why?  Because he's upgrading the talent on the field (#40 recruiting class this year) and in the coaching box.

And in that year, things have changed in the football program, but also at the Athletic Department.  They announced the inaugural class for the University of Illinois Fighting Illini Hall of Fame with 28 members.  The golf program continues to hum along in amazing fashion.  He hired a new Volleyball coach.  And...They also announced the Memorial Stadium renovation (South Endzone and maybe a new facility by the indoor training complex like what they're showing below. 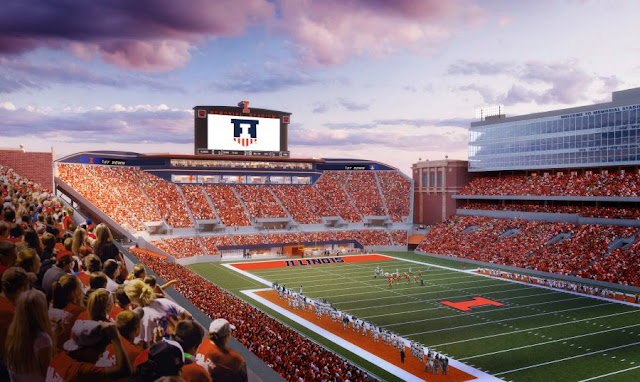 And now comes his biggest decision yet:  to keep or dump Hoops Coach John Groce.  I think the loss this weekend at Rutgers made the decision easy for him.  Let's hope he can salvage the recruiting class, right?

As a fan, supporter and alum (and former football punter on the football team!) , I can only hope that when I look back at the state of the program(s) on March 7, 2018, we can see as much progress as we saw in this one year span.  I-L-L...
fighting illini fighting illini football illini illini hoops john groce josh whitman lovie smith memorial stadium one year ago today university of illinois