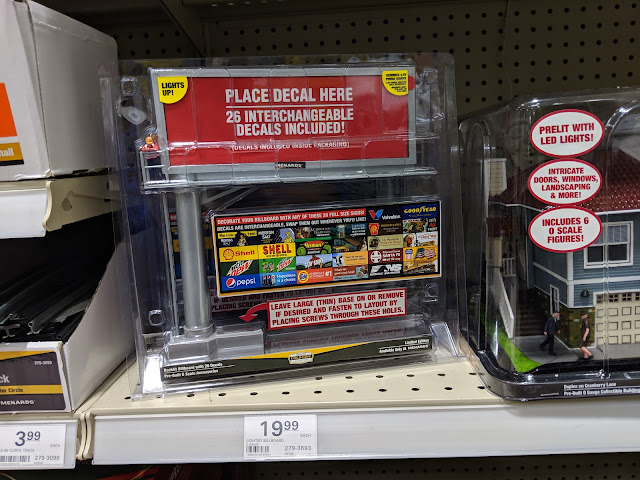 In addition to all the Christmas Village buildings from Lemax that I posted last week, Menards has also introduced their holiday toy section including a lot of HO and O Gauge train items.  They have a bunch of cars (I've posted about some of them before) and buildings.  But this year, one item caught my eye:  this Lighted Billboard.  You can see it in the photo above.  But also here on the Menards site.

It comes with 26 different signs that you can put in the billboard ranging from vintage scenes to modern, current logos like Pepsi and Mountain Dew.


Pre-lit and prebuilt, this O-scale billboard features 26 interchangeable decals. Decorate your billboard front and back with an assortment of colorful decals, including popular brand names and railroad advertisements. This backlit billboard also houses over 25 LED lights, ensuring your chosen decal will come to life with beautifully saturated light! Constructed of wood and metal for maximum strength, this finely detailed accessory also includes two O-scale workers, a replica metal walkway, ladders, and a sturdy base. This billboard is specially designed to be used anywhere in your train layout.


The 26 billboards are shown on the site.  The first ten include three Menards signs plus some of their vendors like Brawny paper towels and Tide detergent.  There are two cute vintage ones including one for Kellogg's corn flakes and Morton's Salt (also, what I think is a more 'current' Morton Salt one).

These are via Menards product listing. 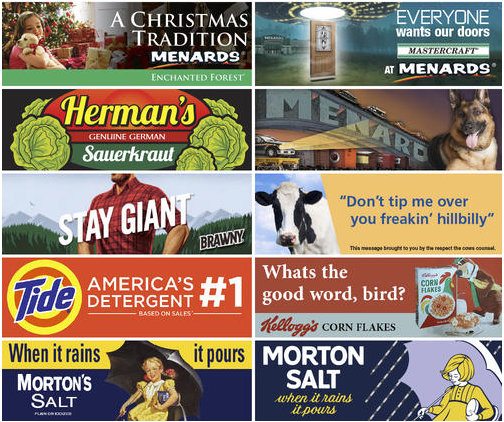 The second ten include both a current and vintage Shell sign.   A couple of current Pepsi and Mountain Dew signs and what I think is the star of the show:  the Buy War Bonds vintage sign. 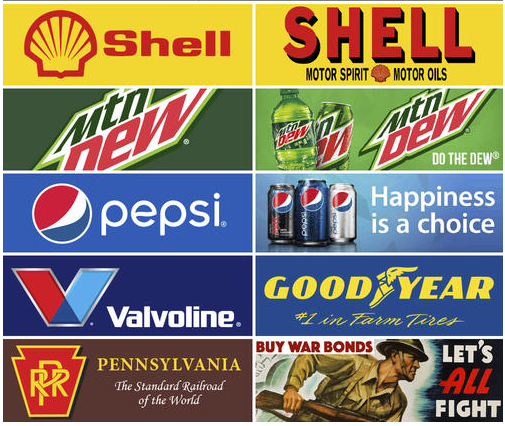 And the last four that they show (note...this only adds up to 24...not 26.  You'll have to zoom into the photo at the top of this post to see the remaining two.  They are Norfolk Souther and Texas Special) are railroad-specific vintage signs including two for the Santa Fe Railroad (which is the line my Dad runs) along with a Great Northern and Union Pacific.