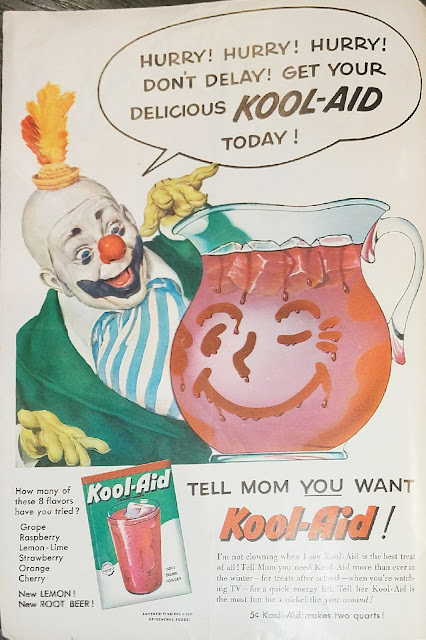 Right at the end of November, I posted a photo of a Walt Disney Comic book featuring Donald Duck on the cover that I had bought for a buck at an antique mall in Wisconsin.  Inside the back cover of that book was this rad Disneyland View-Master ad that featured the discs from the five realms of Disneyland.  Today is the third post all from that same Disney Comic book - this time another advertisement.

Inside the front cover - in glossy stock - is this Kool-Aid ad.  Featuring that crazy-looking clown and the "Tell Mom You Want Kool-Aid" call-to-action.  It also features the value line of "5 Cents makes two quarts".

A quick Google search reveals that this clown ad was commonly run over the years.  I'm guessing that this clown was also probably in their tv ads?  I grew up in the 80's with the Kool-Aid man running through the wall, so by then, they had retired this (frankly...scary) clown.