A couple of months ago, I posted some new coasters for the collection that were from Oga's Cantina in Black Spire Outpost in Disney's Hollywood Studios.  Those were the 37th coasters and 13th Disney-specific coasters.  I mentioned that the rise of parks ephemera in the form of drink coasters is a really nice trend. Today's post is featuring a new Disney coaster from their new (at least to us) resort called Disney's Riviera Resort.  On the ground floor, near the pool, there's a great lounge called Bar Riva.  It is like eating indoors outdoors.  Or, eating outdoors indoors.  The food was good, the place looks great.  And...they have custom coasters that are oval and include this RR-logo that you can find in various places around the resort. 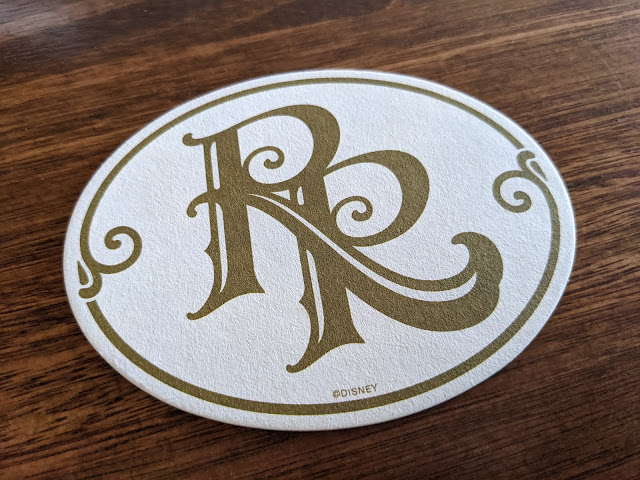 This makes 14 Disney coaster sets (thanks, Lamplight Lounge and Oga's Cantina for having to say 'sets') that I've documented on the blog for the collection.

The full Disney list includes:
1. The standard one you see in your rooms @ Walt Disney World resort hotels.
2. This black and white one from the original Disneyland Resort Hotel.
3. This *new* Walt Disney World resort hotel version that updates the look of #1 above.
4. One from the Irish pub Raglan Road restaurant in Disney Springs.
5. From inside the Magic Kingdom comes this one from the Skipper Canteen.
6. Right outside the Boardwalk Inn Hotel is where we got this coaster from the Flying Fish restaurant.
7. Back in Disney Springs, I found this one from the Boathouse.
8. Back on The Boardwalk is this one from the Abracadabar.
9. Down in the bowels of Disney Springs was this one from Enzo's hideaway.
10. A 'found' coaster from the Contemporary Resort long after a trip there.
11. This post about the Lamplight Lounge at Pixar Pier - which features six different backgrounds. But, I'm considering it just one coaster for record-keeping purposes.
12. A logo-themed coaster from Aulani - A Disney Resort and Spa - in Ko' Olina, Hawaii.
13. These Oga's Cantina coasters from Black Spire Outpost on Batuu.
14. A new shape - an oval - from Bar Riva at Disney's Riviera Resort in Walt Disney World.