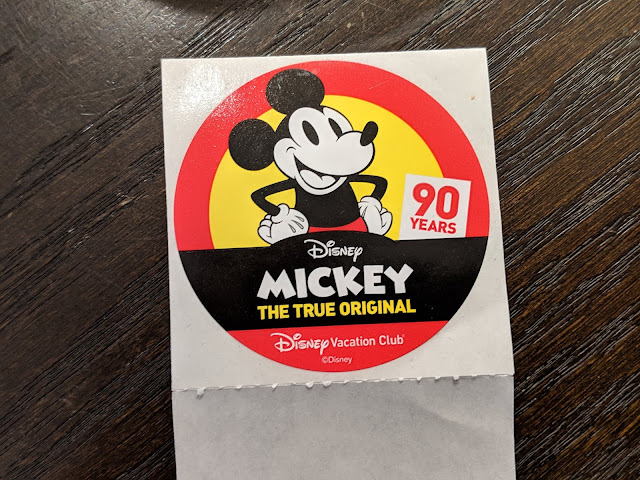 If you're anything like us and have been to Disney Parks from time to time, your kids have probably been covered in various character stickers from cast members.  Most often these days, those stickers are coming from cast members (salespeople) who are manning Disney Vacation Club kiosks in the parks and in/around the resort hotels/property.

The stickers that are most common are of just Mickey the Mouse himself.  Either of his head by itself of his whole body.  There are other, what I'll call 'more rare' stickers that you can get inside the parks and I've chronicled some of those.  Most recently, we were given this 'Honorary Aviator' sticker from the guys at Soarin' in DCA.  Job-specific roles on the cast have stickers, too.  Here's one from a custodian.  And one from a Monorail pilot.  And we were given this Minnie Mouse sticker somewhere in the parks - which is less common than Mickey.

However, during our stay at Aulani in Hawaii, we came across this *new* Mickey the Mouse sticker.  It celebrates his 90th birthday/anniversary and seems to be part of the cohesive Mickey @ 90 campaign.  (See these Mickey Bars being in your grocery store as another example.)

I've gladly added it to a part of our pin board in the garage that needed to be filled in a bit.   Thanks to the little-too-aggressive DVC salesdude!
Aulani disney Disney Ephemera Disney stickers free at disney Mickey Mouse stickers